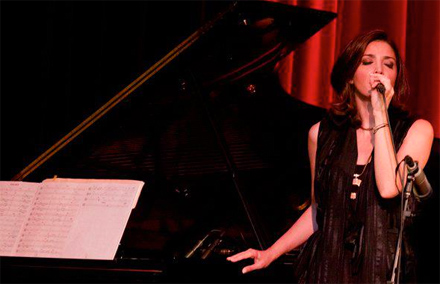 By the time we got to the encore, the audience’s polite “let’s wait and see” clapping had turned into a heartfelt applause of delighted surprise. Stage time was short at San Francisco’s Yoshi’s Jazz Club and we weren’t sure if we were even going to get that encore. But when its final note was played, the crowd enthusiasm broke the critic’s barrier. It was as though a tennis champ had slammed a powerful ace blowing away his opponent with game, set and match, where no voice from the commentary box could deny the obvious fact that an impressive victory had been scored, faults and slips notwithstanding.

“Ey baabaa, they were just getting warmed up!” commented some friends who wanted the band to stay on. Before the concert they had warned me that diaspora Iranian popular music wasn’t their “thing.” Now, thanks to this performance, they saw the potential for the genre to rise from the ashes in a younger, jazzier, and relevant form.

Sepanlou has a much stronger stage presence than one would guess from her videos so far. Before seeing her live on stage, I felt she should consult a choreographer. Now I see that what she lacks in her videos is more loving camera work. Her subtle stage choreography is–quite successfully–meant to highlight the music during the instrumentals, instead of draw attention to herself. Tallish and regal in figure, with a soft wisdom radiating from her Persian-lovely voice and face, she influences her listeners in delicate steps until they become her captives. Her choice of lyrics reveal compassion and deep poetic intelligence as she lends her voice to the silenced artists of Iran, an immigrant who slaves away for $8 an hour, or a woman who carries a flame for a man who–we know, but not she—doesn’t deserve her.

Farzin Farhadi, who composed and arranged most of the songs, plays the saxophone like nobody’s business. In fact, the powerful ace slammed into our court during the encore came from Farhadi’s sax. Packing a whole sonata’s worth of development into a brief but scalding fluid sax solo, he left the audience stunned with his musicianship and virtuosity. Another instrumental highlight was the lively and mutually teasing duet between Dennis Hamm on piano and Lea Zegger on jazz violin.

If a jazz band metaphorically lived in a musical tent, the drummer and the bass player would be two dwellers who also double as the poles and the ropes that hold up the tent for everyone. Kasra Saboktakin on Bass and Simon Carroll on drums effortlessly maintained the large volume of musical space where all the exciting tonal action took place.

I did mention about friends at the concert saying, “Ey baabaa, they were just getting warmed up!” Which bring up the question, “When is the next concert?

Note: Photographer Mahnoush Rafat has captured the concert in images you can view on Sepanlou’s facebook page.