How Useful Are Iranian Know-It-Alls And Their Advice? Part 1 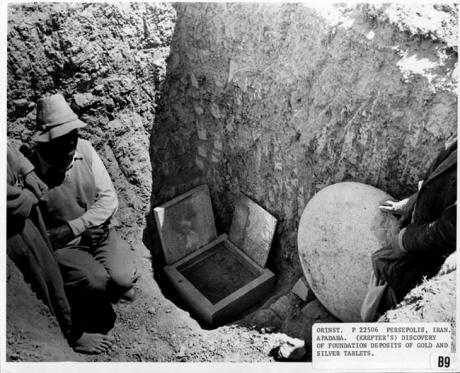 Iranians are probably the best people I can think of, when it comes to appearing to have everything all figured out. In fact, there seems to be some kind of contest between them to look more knowledgable than the next Iranian, judging from what’s on Iranian.com

But just how authoritative are Iranians on anything?

Are they even any good at knowing anything about themselves – or even showing curiousity about what’s physically located in their own country?

Let’s begin looking for an answer to this question with a look at an example from Iran’s archeological history.

In the 1930s, it appears that a German archeologist, Ernst Herzfeld, was instrumental in the discovery of some tablets from ancient Iran at Persepolis, including the famous one inscribed in gold from Darius.

Another German archeologist assisted with the archeological work around Persepolis. His name was Prof. Friedrich Krefter.

I’m really just beginning to read about arcehological discoveries in Iran, but from what I’m reading, it appears that not a single discovery was ever made by an Iranian – all of the ones I’m reading about so far were made by foreigners.

I think this isn’t a cause for pride for Iranians, that they didn’t manage to even discover their own ancient history, and have to go and study foreign books and consult the work that was done by foreigners in Iran, in order to learn about it.

But you wouldn’t know from looking at Iranians that they lack anything in their ability to explore or understand the universe, let alone things that were in their own country that they had acess to for centuries but ignored.

Naturally, there are reasons why Iranians never lifted a finger or showed much interest in some burried stone carvings or tombs (except to plunder and ruin them whenever they managed to find them).

Most Iranians were living well below the level of any type of poverty that most people reading this would even be able to imagine.

People who are barely able to eat well cannot take an interest in stones and broken remains of buildings, or wonder what secrets ancient writing contains, when they cannot even deviate a little bit from the traditions and way of doing things that have been tried-and-true for centuries, and have kept them alive and preserved the one thing that kept them going: their community.

Instead of looking to ordinary Irnaians for evidence of why they didn’t do any exploration or inquiry, we would have to look at those Iranians who did have that ability to “play”: Iran’s elite.

Whatever endeavor that might have been done in the direction of exploring Iran’s ancient ruins, should have come from them.

The responsibility for the failure to take an interest in anything beyond showing off in front of each other, or looking good – or rather better than the next dressed up Iranian – must be laid squarely at the door of Iran’s elite: the landowners, the royalty, and the powerful people who perhaps surrounded such figures.

So we’re left with this question: have they got it right today?

I don’t think so.

Even the richest Iranians – and the ones who fancy themselves to be “Westernized” – are affected by the crap that affected the previous generations of elite Iranians.

They appear to be big on showing off. They think they know everything. They are smug with assurance that they have everything at their fingertips already.

… and they are remarkably conservative – i.e. fearful of doing anything to risk being toppled from their prestigious position by engaging in any unseemly behavior that might strike observors as odd or uncharacteristic of what society expects of them.

In other words, they have none of things that a true explorer would have – and that is an attitidue of “to hell with the world or an audience, this is damned facinating and I want to get to the bottom of it! I can’t sleep until I find out what’s under this dirt that is covering this half burried stone carving. I don’t care if I get my hands dirty or look ridiculous in front of people who want me to justify to them why I’m doing this, or what use it is”.

So when Iranians offer you advice about something you intend to do or are doing, think carefully. Don’t just accept their pronouncements as if it were gospel.

Look at their cultural attitudes, and ask yourself where it got them.