How Useful Are Iranian Know-It-Alls And Their Advice? Part 5 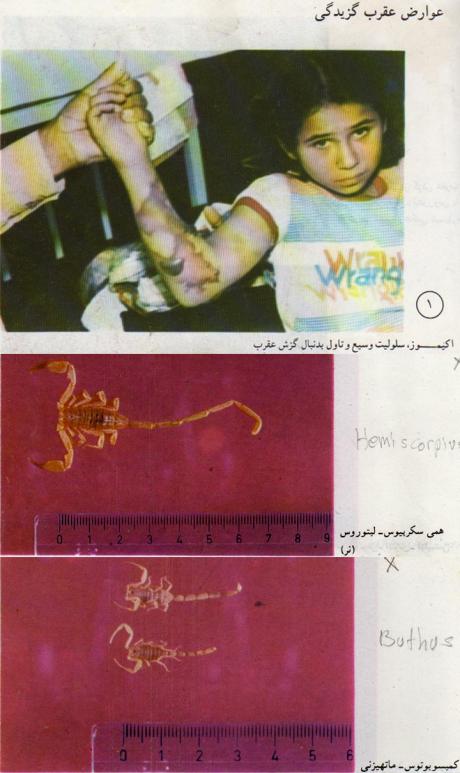 The above illustrations come from a book about Iran’s scorpions that was printed in Iran.

The cover of the book names the author as “Reza Farzanpei”.

But the book appears to rely heavily on work done by non-Iranians.

As you guessed it, none of the names of the species are Iranian, and there appears to be no particular species that was given even a common unscientific name by scientific important Iranians.

The book was given to me by the only Iranian I knew in Iran who had any interest at all in Iranian wildlife. He was an outcast inside of Iran, and had no respect from even his own family.

You see, Iranians are very important.

Their culture is very important.

Their society is very important.

Each Iranian has a reputation to maintain.

Once I was closely examining a fly repeatedly extruding a vomit drop from its proboscis, and sucking it back up.

I called a medical student who was nearby to quickly come and have a look.

The medical student said that he has no time for such nonsense.

I puzzled at this pronouncement. His sudden display of regal importance was at odds with his earlier “Ghazvini” jokes about homosexuals, in which he playfully called one of our mutual friends a homosexual.

Here was a natural phenomenon of scientific interest which , and Mr. Important was too high and mighty to even have a look.

But he was not too high and mighty to socialize by telling dirty jokes about men having sex with each other.

I had caught a few dozen scorpions with my friend, while in Iran. I actually brought them home and kept them alive in captivity.

I got strange looks from people.

But Iranians are important people. They know what matters.

However, let’s back away from their idea of what is important for just a little bit.

Scorpions sting people. Judging from reports, that hurts. In fact, some people die of the sting. Most often the people who are stung are the ones who know or care nothing about them, but who are surrounded with them – in other words, people like Iranians.

Foreigners – who were already acquainted with useless discovery – set up Iran’s Razi and Pasteur Institutes, while Iranians were busy having a who’s-more-important-than-who contest.

These two useless institutions supplied Iran with antivenin and antidotes, as well as vaccines.

Because of the antivenin and antidotes, people suffering from scorpion stings finally have some hope of relief.

The girl in the above photo ended up having necrosis of the affected areas. Had the antidote been immediately available, such extensive tissue damage might not have resulted.

But these things are unimportant. What’s an arm? Who has time for this stuff?

Let’s focus on more important things, like bragging about how great our family history is, or telling Rashti or Ghazvini jokes in a dinner party….

… or receiving the homage of the bowing Iranian masses.

Playing with bugs is something to look down on. The author of the above mentioned book, Reza Farzanpei, probably is deemed equally unimportant. Few Iranians will try to emulate his reporting on Iran’s scorpions, let alone do any discovering of their own.

What are bugs? Its politics! Iranians have abandoned almost every human endeavor except that. They even study and get degrees just to make bigger statements.

While the Iranians were busy collecting their important social-recognition baubles, the foreigners studied some microscopic hairs on scorpions called “trichobothria” that Iranians never knew anything about. They wasted time learning to tell the difference between some species of scorpion that might be indistinguishable to the untrained eye without examining the morphology in such detail.


Pictured beneath the young victim are two of Iran’s scorpion species: Hemiscorpius lepturus, and Compsobuthus matthiesseni. Iranians call both species “aghrabeh zard”, even though these are not only different species, but from entirely different families of scorpions: Buthidae and  Hemiscorpiidae.

One striking difference in their morphology is the size of their claws: the Buthids have slender delicate claws, while the Scorpionids have fat crab-like claws.

(Anyone who knows better, please correct me!)

But what does it matter? A scorpion is a scorpion, and when someone is stung by one, there is no need to order a particular kind of antidote. There is no need to tell what species it was. An Iranian medical student or doctor who is too important to even look at unimportant bugs would know what to do anyway. All he has to do is look at a book that contains information that foreigners discovered about them.

While Iranians woke up each day with new ideas about how to stare down from their big noses at others, the foolish foreigners caught and catalogued probably every species of scorpion in Iran, Afghanistan, and neighboring Iraq.

So why should Iranians lift a finger? Iranians have more important things to worry about. Studying is done for the sake of becoming important, not for learning useless things.

The question for me is: why didn’t Middle Easterners do it? Why didn’t Iranians discover or even show any interest in their own scorpions (or any other arthropods, or indeed ANY form of life other than their esteemed important selves)?

As usual, the question cannot be posed to the Iranians who have never lived without poverty, and have never been exposed to new ideas.

So we must ask it about those who have.

I’ve learned by now not to pose such truth-seeking questions to these particular Iranians. Most of the response is simply a reaction towards my perceived questioning of their importance ( which disturbs them).

It ruins their “high-and-mighty” act.

Politics, not truth, is what most Iranians care about.

I did however get perhaps one explanation out of a commenter so far, out of all of the responses to the four previous articles in this series, that might shed light on one possible answer: someone pointed out that the enlightenment never reached Iran.

That seems to explain a lot.

However, there is this other aspect that I find troublesome: the obsession with ones own importance.

In Iran, importance means social relevance – which means whether something has recognition by the public.

The truth cannot be known about anything without consulting public opinion. Ones place in society must be assured, and so what everyone one does has to “fit” the people’s expectations.

Something that is not discovered or is unknown, naturally has no recognition from the public. So that thing has no importance. Therefor, it is dismissed. Therefor it is ignored.

Every case mentioned in this series of an Iranian turning their back on what I was showing them, was probably a result of their evaluation of the thing as “unimportant” – i.e. not having any recognition from the public. That of course means that they won’t care about it.

The dictatorship of the tribe rules. The regime of public recognition reigns supreme.

Would an Iranian go out and spend hours trying to catch scorpions and enduring the mockery of his fellow countrymen for doing it?

His importance-regime prevents him from doing it.

Iranians and their culture of “importance” have probably destroyed the inclinations of every would-be discoverer that Iran ever might have produced.

“Let’s be proper and sterile”, should be the motto of Iranian culture.

If you ask the average Iranian know-it-all for advice about doing something new that has no acknowledgement or no currency among Iranians,  know ahead of time that the answer will probably be dismissive.

I’d rather be like the foreigners who discovered Iran’s archeology, mammals, snakes and scorpions and not bother.