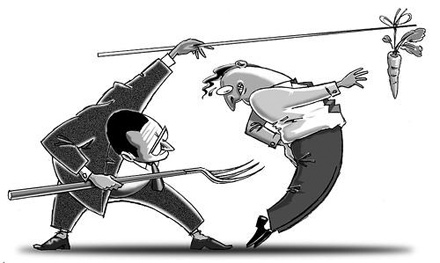 Well this is awesome. It looks like we are finally getting somewhere! With the lines now drawn clearly, and less confusion coming from a rapidly winding down Iraq, and a soon to be quietly chirping with crickets Afghanistan, the US can rest up a bit, get some decent grub for a change, do some Christmas shopping and ring in the new year by turning it’s attention to a much deprived Iran.

Uh, Yeah Right! Not so fast! With a little thing like national pride at stake on both sides, this isn’t going to be the child’s play cakewalk that Iraq and Afghanistan weren’t.

Got Proof? The louder the chest thumping threats of complex derivative driven drivel from the banking community announcing those “tough new banking sanctions” no one understands get, the louder Iran’s “Missile Commanders” pointing out their extensive targeting capabilities, and Google maps of the Tel Aviv suburbs get.

Or one side is trying to brag about how sexy money is, while the other is bragging about the size of his dick. And if history is any judge, with Sex and Drugs, Rock ‘n Roll is not far behind. Innocent people on both sides are about to get screwed.

By denying Iran the banking it needs to store all that sold-to-China oil money, as well as the funds stolen from Iranian banks, the US or shall we say the UK is pushing Iran to move it’s currency elsewhere. It’s not like the Emir of Dubai has anymore construction projects going on these days. Not actually a smart move given the state of the UK’s banking industry after the great crash of ’09. After all money is money, and having lot’s of Iran’s money ought to be taken into consideration at some point. I mean how are you ever going to steal it if it’s not in your banks?

By insisting that Iran has the right to develop outdated, inefficient and largely unnecessary “Nuclear Power” and “Nuclear Medicines” that no one actually uses anymore, especially since natural gas is far more abundant, and uh, FREE, Iran is pushing the last of it’s fast running out luck. For just like those sexy chiffon see through cloaks, “The Mollah has no clothes”.

You know the story don’t you?

Once upon a time in a land far away, or somewhere between Iraq and Afghanistan there lived an emperor. One day the emperor was approached by 2 charletans named Bas and Iji who convinced the emperor that they could weave him a cloak of the best cloth in the land. This cloth was called Faghih. No, not faggy, although the emperor was known to be fond of young boys, but stop interrupting me!

Soon Bas and Iji delivered the emperor the cloak made of the Faghih cloth. To the emperor’s surprise, he could not see anything. Bas and Iji had fooled the emperor into thinking that Faghih was the best cloth, when in fact it was no such thing. The famed cloth of Faghih did not exist. The emperor then allowed himself to be dressed in the clothes for a procession through town, never admitting that he was too unfit and stupid to see what he was wearing. For he was afraid that the other people would think that he was stupid. Of course, all the townspeople already knew how stupid the emperor was, but they pretended to wildly praise the magnificent clothes of the emperor anyway, too afraid to admit that they could not see them.

Until a small child said: “But he has nothing on”!

The child was promptly sent off to Evin prison to think long and hard about the hurtful thing he had said, and also to recover from his many “accidental” rapings.

“But he has nothing on”! was whispered from person to person until everyone in the crowd was thinking it, but knew better than to say it out loud, and out of fear of more accidental rapings in Evin. But the emperor knew deep down that they knew and held his indignant head high and finished the procession nevertheless.

Bas and Iji were eventually promoted to “Chief Accidental Rapists” and given fancy villa homes in the North, and the Constitution of the land was eventually changed to make it illegal for anyone to ever say that the emperor had no clothes, or that Faghih didn’t actually exist.

The accidental rapings in Evin however, continued. With greater emphasis.

The alternative in all of this drum beating and posturing though is for both sides to admit fault in the slow and steady degradation of relations between a country whose people are actually quite fond of each other, in spite of the falling out between their “Uncles” and “Fathers”.

The concept that to forgive is to forget. While both sides have ample reason to resent the other, the hardest thing to do, that apparently cannot now be done, is to put aside the old out dated animosity, reset the counter, and make the conscious decision to move ahead anew.

It appears that certainly Iran has a lot more peccadilloes than the US to account for, which primarily has the continued obstinate blind defense of Israel, along with that whole Mossadegh dealey to continually hamstringing it’s quest to regain some sense of being the honest broker that has kept John Wayne turning over and over and over in his grave.

Iran is no peach in this. Or no pomegranate. Or Iran is a pomegranate that has rotted from the inside, all the juiciest pearls gone to waste.
But even with the rottenest pomegranates, there is still quite a lot to salvage, and you can get quite a lot of juice out of it if you are careful and properly pick away the rotten ones.

Here’s hoping no one has asked Santa for that Montel Williams Juicer!