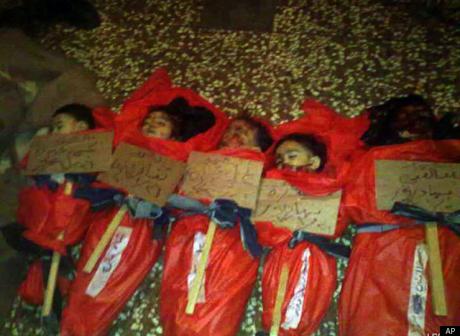 Another day, another report of massacre of civilians by the Assad regime in Syria.  More than 5,000 people have died, mainly civilians, including women and children.  Homs is being indiscriminately shelled by tanks, missiles and heavy artillery while the world is sitting by idly.  The Assad regime is not allowing food, water or medicine to reach Homs, causing the residents of the besieged city to starve to death or die for lack of basic medical care.  Reports are all over the internet.  There are hundreds, or even thousands of videos that can be easily found by searching YouTube or Google.

Those of us who have been on this site for a while can remember the hysteria over the whole Turkish “Gaza Flotilla” a couple of years ago.  There were two blogs, this one, and this one written on IC condemning the death of the eight Turks on board in the strongest terms.  The authors of the blogs, and those commenting and supporting them on the blogs presented themselves as peace lovers and people who stand for human rights and justice around the world, regardless of the nationality of the victims.  Yet, the same commentators and bloggers are completely MIA when it comes to the ongoing massacre in Syria.  In fact, the only thing they decry is the way the Assad regime is portrayed in the media.  Don’t believe me?  Look at this blog for instance.  One of them even commented on the blog by saying that we should be more concerned about women’s right to drive in Saudi Arabia than the ongoing massacre in Syria!!!  And this is the same person who not too long ago wrote this long winded blog talking about the injustice to the Palestinians!!

So, get one thing straight folks:  every time you see one of these people talk about peace, Palestine and human rights know what it’s all about:  pushing the IRI line.  The IRI talks about Palestine, they talk about Palestine.  The IRI defends and justifies the massacres in Syria, they defend and justify at as well.  The IRI says that this is all a Western media conspiracy, they parrot the same thing.  The last thing these people are interested in is human rights.  Let’s not forget that Syria is right next door to Palestine that they beat their chests for every single day.

But, let’s keep focus on the subject of this blog.  In the absence of our resident bogus human rights and peace activists, I decided to write this blog to allow people to share their thoughts, news stories and developments about the human catastrophe in Syria.  Please feel free to say what you want in support of the besieged people of Syria and to share news stories about the on going events.