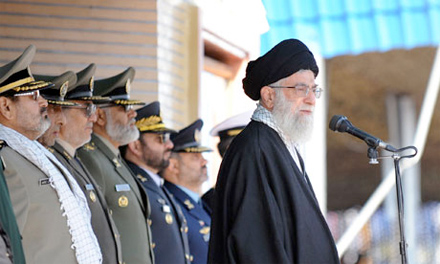 In yet another bizarre communique, from another un-necessary, un-authorized (at least if you consider a vote by common Iranian-Americans at large to be authorization), self appointed Robin Hood political foundation, organization or whatever aberration you choose to call them, this time the AIC or the American Iranian Council, has tried to explain the intricate details of the upcoming parliamentary elections in Iran.

This is an opinion. All mine.

The breakdown of the game, offered by Hooshang Amirahmadi and Shahir Shahidsales.

Hooshang Amirahmadi’s lineage as an expert on Iran is legendary. He is a “professor of the Edward J. Bloustein School of Planning and Public Policy, at Rutgers University. [He] has served as director of the University’s Center for Middle Eastern Studies, as chair and graduate director of his department at the Bloustein School, and as the University Coordinator of the Hubert Humphrey Fellowship Program. Dr. Amirahmadi is also a founder of the Center for Iranian Research and Analysis. Like any self respecting Professor, he even has his own consulting company Caspian Associates, Inc., “an international strategic consulting firm headquartered” and like any good consulting firm, this one is headquartered in Princeton, New Jersey.

Shahir Shahidsales, I’m not so sure about, but if I am correct, he is an Iranian-Canadian or a Canadian-Iranian depending on how Canadian he is and whether you want to use a or an. If I’m right, (I could be wrong which is why this is only an opinion), he is an engineer, but with 10 years experience writing his opinions (just like this one!) about Iran and the middle east. 10 years might sound like a little, but it depends on how good those 10 years are, like me at 51 it’s not the age, its the mileage.

So with all this pedigree. One has to naturally wonder what the article is about. One has to therefore take the time to read it too, especially since it comes with a video, that you are encouraged to view, not once but twice.

So I did. The article took 1 minute, but for some reason the video which is only Amirahmadi reading the same article in front of camera, took 10 minutes. Minutes I will sadly never see again.

The analysis of the rivals, the factions, the internal titillating possibilities if this group wins or that one wins, and why this group is sitting out, all fodder for foment.

And I almost believed it too.

But apparently with all the education and even with 10 full years of writing opinion, the one tiny detail of how an Iranian election actually works, seems to have unfortunately eluded this obviously dynamic duo. Of course I am kidding. This is pure satire. Sarcastic to be sure, because you can do that with an opinion.

The main detail of any Iranian election you must be aware of, is the candidate selection process.

In Iran unlike anywhere else in the universe, ALL candidates for Parliament as well as the President of Iran, must go through a piety test, and get the tacit endorsement of a priest. Or the Guardian Council gets to select every candidate who can run for Parliament. I think they might even have a gang-sign tat by now.

Once elected the new Parliament member must swear this oath: “In the Name of God, the Compassionate, the Merciful. In the presence of the Glorious Qur’an, I swear by God, the Exalted and Almighty, and undertake, swearing by my own honor as a human being, to protect the sanctity of Islam and guard the accomplishments of the Islamic Revolution of the Iranian people and the foundations of the Islamic Republic; to protect, as a just trustee, the honor bestowed upon me by the people, to observe piety in fulfilling my duties as people’s representative; to remain always committed to the independence and honor of the country; to fulfill my duties towards the nation and the service of the people; to defend the Constitution; and to bear in mind, both in speech and writing and in the expression of my views, the independence of the country, the freedom of the people, and the security of their interests.”

So, to become a senator in Iran, you have to first be cool-cleared by the GC. Then you can run, and if you win, you have to swear the blood oath of loyalty to the SL and the Q.

If this starts to sound even a bit hopeless, it isn’t. It’s far worse than that. It’s pointless too.

Because even if the heavens opened up and suddenly you and all of your fellow parliamentarians could agree on just one simple law, say, to reduce the number of seconds that red lights take to turn green, That would have to be approved by the Supreme Leader.

Just in case you and your brethren rushed and didn’t have the fore and hind sight that only a truly Supreme Leader can bring to the table. One you aren’t ever invited to sit at.

So you can now see my consternation which is a polite word for something far more energetic, when I see the right honorables Mr. Amirahmadi and Mr. Shahidsales, expound on the details and importance of this election.

The fact that they don’t know the punchline of this now 33 year old joke, and think there is actual real-politik in Iran is so stunning that it is actually beautiful. Like wonderful music that you can actually see the notes floating in the air, and a color so vivid that you can hear it’s melody.

Because, given the rules, and I really need you to get this detail, the Iranian parliamentary election or any election in Iran isn’t important, and doesn’t matter.

The game as always is rigged. The competition is fake. The players are all liars.

The real duty of all Iranians is to protest vote, or not vote at all.

Wait, you do know how to cast a protest vote right? It’s kind of like this article. A free opinion.