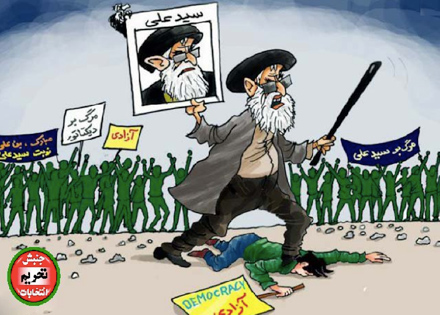 Normally, I, like most, am a coward, and it was that when the going got tough, like most of you reading this, I too would go shopping. We would sit idly by and nevermind do anything, we would be be hard pressed to even say anything.

I can only imagine what Iranians inside Iran would think of our recalcitrance and apathy and sudden quiet in advance of one of these amazing “elections”.

Some would retardedly suggest that voting in the Iranian election was a symbol of patriotism, and some even more preposterously would stand in line across the US at designated polling stations to cast their votes. Proudly even.

However, now, based on the upcoming elections in Iran, I’m not staying silent anymore.

I think it is time for the Iranian people to protest this travesty and sham. I think enough is enough.

We’re not stupid and we aren’t sheep. We don’t need a Supreme Leader or a Shepherd. The collective average is always far smarter than a single weak and fallable (but heyf not flammable) man.

Based on 33 years of this, anyone who votes in the upcoming election, is a dolt. A fool. An utter idiot. And frankly, guilty of the highest treason. Because after all this, they should by now know better. Only a complete stupid idiot would think different.

Because this is a system that suggests that common people cannot choose the best person for a government job. They have to be spoon-fed, “wise” choices, pre-made for them behind closed doors, by the most corrupt politburo on earth, who have shat upon the Qoran at every stage of this genetically-defective-still-birth-revolution, one that puts a hilarious zoo-animal like Jannati stage right, the clinical definition of corrupt-upon-the-earth Rafsanjani stage left, and the Impresario of the most amazing of all circuses ever to come to our town, Khamenei, front and center.

In spite of the Caspian Sea of blood on their hands, honestly, I could actually live with this if it were on the side, and an option for the blood-lust-bazaaris who seem to think that good business is always better with a nice dose of “Nazr” to go with it.

I get it. The Mollah has his place in the khorafat-ridden version of Islam that is the definition of modern Iranian Shiism. I get that. And honestly I have no problem with that.

But to so dominate the lives of life-loving Iranians? I don’t think anybody signed up for that in 1979 or again in 1989. I think Iranians want a system that self regulates every 4 years. Not 6. 4. Because you can get rid of them faster if they fuck up.

The concept that the depth of pure shit that has fomented and formed into a grander deception, one that has the emperor parading around in an invisible cloak, as the docile and extremely well fed court who pretend to admire his choice of couture, is proven by the fact that if you’ve noticed, the top Mollahs are actually wearing an honest to god invisible teddy these days!

Now, if you are once again, falling for the ruse that the upcoming elections are “important” or the slightest bit interesting, allow me to shock you.

The only response to a rigged game is to not play.

The only response to tyranny is polite objection.

Firm, resolute, no backing down, straight-forward without stopping, polite objection.

So you can keep your Qoran if you want. I don’t personally need one, because I believe in the Universe. But if you need one, go ahead, keep it, refer to it and divine the answers you seek from it. Just like any decent Hafez, the Qoran helps you sort out your spiritual response to Nature and Fate’s sudden twists, with a reasonably acceptable folklore and myth. The Qoran is quaint and endearing in that way. So go ahead, keep one under your pillow if that suits your needs.

Because after 33 years of this shittiest of sentences, we are thankfully and finally up for parole.

This election is one more time to march. This time not to Shahyad monument or Azadi square where no one lives, but straight to Khamenei’s house. Where the senior snake in charge sleeps.

Take whistles and noise makers. Start making noise. have some fun, dance, and laugh, but make lots and lots of noise. Above all no slogans and no attempts at brainwashing via Sho-ars. Just make lots and lots of noise. When the Basijis and secret and not so secret and regular police arrive, sit down, don’t get up, don’t run, don’t fight back, and don’t resist arrest. Let them pick up and haul you off one by one.

This will take days. 36 hours of sleeplessness and the old man, like all old men, will cave in.

This is all we have to do. Make one feeble old man cave in to the pressure that lots of noise brings, to step aside. This is the pitfall of having one old man in charge of every fucking thing. It is that easy to unravel it.

Everyone should simply make as much noise and convey the honest intention that they want him simply to step aside, and go away.

Again, we are not sheep. We don’t need a Shepherd. We will be fine in this world and the next. Thanks very much, but no thanks. On average, and overwhelmingly, day-today, we don’t need you. Say a moronic but somewhat soothing prayer whenever there is an earthquake or other natural disaster that once again only questions further the entire viability of the concept of unquestionable “faith” by masking it as a test of will by God, and that will be fine. Those that believe in this crap can be soothed. Nothing wrong with that.

But for God’s sake, stay out of the governance of a modern 21st century people. We’re not taarofing about that.