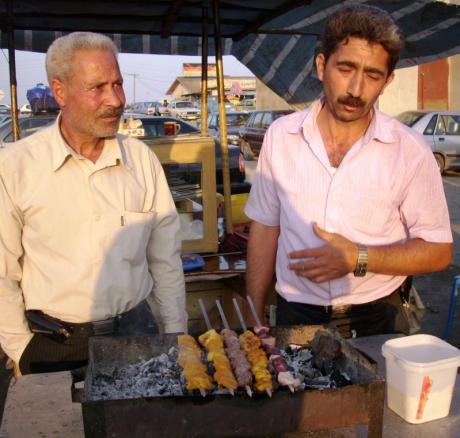 This morning I was reading this article on Daily Beast that there may be behind the scenes negotiations about a compromise to avert this latest Iranian crisis.  I say latest because since 1979 there has ALWAYS been a crisis about Iran!  Nonstop!  I’ve spent all my adult life living with one Iranian crisis after another!

Anyway, in the article The Iran-Washington Conspiracy? they are talking about a possible breakthrough that Iran would agree to keep the enrichment to 5%, far below the weapon’s grade enrichment, agree to stringent IAEA inspections and in return US and Europeans would agree to lift the sanctions and agree to security guarantees.

So I thought is this possible, will they agree to it?  Then I recalled the astute observations of our i.com political experts that will quickly say they tried this in 2009 with Obama’s initiative and the Islamic Republic backed out.  So that’s it?  back to square one?  What about the diplomacy?  While we are beating each other on the head for the past few weeks they were trying to find common ground afterall.

If diplomacy is just for show then why bother.  I say this considering the Islamic Republic, US and the Europeans.  Since Iran backed out in 2009 shouldn’t US and Europe stop the diplomacy and instead prepare for war and let everyone know about it?  Why are they negotiating again.

The fact of the matter is that some groups in Iran, US and Europe will want war and no negotiations no matter what.  In my opinion we shouldn’t concern ourselves with them.  Here in this piece of political analysis Davis Ingatius of Washington Post under his opinion Getting Iran to back down on its nuclear program is providing “two clear instances when Iran has backed down”.  One was the shooting of Iranian airliner (though he said unintended) which led to Khomeini accepting the ceasefire and the second one in 2003 after the invasion of Iraq.  He does not say that first case was after 8 years of war and second one ended in disaster for US and success for Iran.

I’m talking to average Iranians and Americans who do not want war and won’t take no for an answer.  Average people even with a lot of political knowledge and experience don’t know what’s going on behind the scenes.  It’s not a disaster to struck a deal with Islamic Republic to avert war.  Striking Iranian nuclear sites will achieve nothing.  Not even turning the clock back for a few years when they can buy nukes on the black market.  It will not defeat the Islamic Republic.  Iran has a population of 70 million and a war will neither unite millions against the regime nor succeed with clear objectives.

Even if Islamic Republic says no to these proposals we still have to try and try again.  We are not in positions of power and classified intelligence to know about Iran’s nuclear capabilities.  Another words we don’t know jack shit and what we know are based on what media can find out or what the officials claim.  Diplomacy should be for real and not for show.  Those of you who say we should tell this to Islamic Republic, ok Islamic Republic do you hear me?