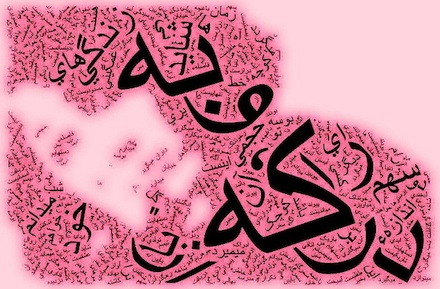 In response to BBC Persian‘s 6 greatest Iranians, I have made a list of 10 most influential Iranians as well as depict them in my Art work.

I was happy with the panel’s chosen list and apart from one or two parallel universe moments when Mr Masoud Behnoud was trying to shove-in the despicable and insignificant Mr Khatami into the list the result was in my opinion a respectable choice of 6 great Iranians.

I made the list bigger so that I could allow 4 more and changed it to most influential rather than greatest. I will explain why I added these four.

Omar Khayyam
Khayyam laid the foundation of pragmatist philosophy in our culture. What is more, he expressed this philosophy in beautiful and comprehensible verse.

For the scientific minded, he is a significant mentor.

Just as prominent as Avicenna but before him, he was another multimath but I have included him for his contribution towards Persian musical theory. His writing was in Arabic so he is mistakenly recognized as an Arab. He was born in Farab which was then part of Iran and the Greater Khorasan, and he is also claimed by Tajiks who were once Iranians.

Forough’s poetry has laid the foundation of modern Iranian feminism. There have been many prominent Iranian women and I can’t believe that for millenniums old nation a single woman was not chosen. She represents the modern Iranian woman and the Iranian woman is the most significant Iranian cultural phenomena at any time but more so in today’s Iran. Our women have become the significant force against Islamic tyranny and opposition both in and outside Iran.

I have always protested that I prefer the system of republic to monarchy and by the very fact that he was the last king over a nation that was always ruled by kings he should be included.

Non-monarchists have become historically kinder to the late shah ( or at least I have!). To a great extend this is because Iranians paid a heavy price for the Islamic revolution and after 33 years many consider it as one of the worst afflictions to be bestowed on our nation and the nation could had prospered by pushing for reforms rather than bringing a regime that burns everything it touches to the ground.

Does that make Shah better? Well yes, when you review his portfolio without prejudice it does!

Shah was really a custodian rather than a king of an independent nation. The reality is that after WW2 after the allies removed his father he became a western ally that helped to keep the Russians out. He had great significance during the cold war. He was blamed for his part in the 1953 Coup against the popular prime minister Mossadegh and ironically when he rebelled against the Western leaders in OPEC and (thanks to oil wealth) he genuinely set the nation towards prosperity he no longer had the support of people.

Losing popularity from both sides and secretly being ill with cancer allowed a counter revolution to take place in an Iran that was ready to burst. Iranians forget that in his own private corner he was trying to hold a nation together, inch by inch make them more prosperous and through his last prime minister Shapour Bakhtiar let them have democracy.

About the Art work

Cyrus the great – The first Persian King. Made from his declaration of human rights on the famous Cyrus cylinder

Mohhamad Reza Shah Pahlavi – The last Persian king. Made from his speech at Cyrus the great’s tomb.

Ferdowsi – Made from the end poem of Shahnameh were he states he has spread the seeds of persian speech.

Forough Farrokhzad – Made from her poem “Another Birth” were she openly professes her love and binding it to all that there is.

Avicenna – Made from a summary of his achievements in various fields of philosophy, medicine etc.

Mossadegh – Made from his speech at the Internation court of Justice defending the nationalisation of oil.

Zarathushtra – Made from Avesta words.

Hafiz – Made from his poem.

Omar Khayyam – Made from his poem.

Farabi – Made from the 12 musical main modal system.