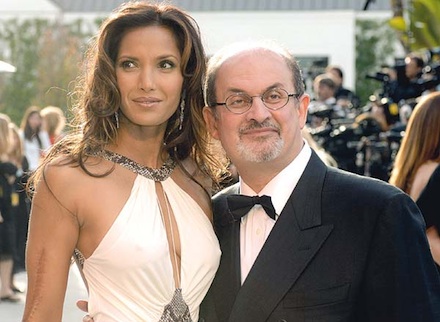 When Salman Rushdie was whiling away the hours in hiding after his fatwa was issued, he could scarcely have imagined that 23 years later a) he would be alive and b) the Iranians would release a video game called The Stressful Life of Salman Rushdie and the Implementation of his Verdict, in which players set about acting on Ayatollah Khomeini’s death warrant.

Rushdie is presumably chased from literary party to catwalk after-party with an attractive woman on his arm (in a fetching head-to-toe number, of course, for this is Iran) ducking to avoid YOU, the Islamist, hellbent on destroying him. The game was unveiled this week at the second International Computer Games Expo in Tehran which sets out to provide “an opportunity to introduce Iranian culture, value and Islamic identity and also a way to present Iranian products to international computer games designers and producers”.

“We felt we should find a way to introduce our third and fourth generation to the fatwa against Salman Rushdie and its importance,” said a spokesman for the Islamic Association of Students, which invited script submissions for the game which it then handed to games developers.

More than anything, the game is an insult to Ayatollah Khomeini – when a Mafia boss orders a killing he’s not going happy if subordinates hand him a joystick and a bag of crisps.

This week two men were sentenced to death in Iran for the possession of alcohol – if only the Islamic Republic were content with punishing them with a video game called The Stressful Life of Anyone Who Fancies a Pint in Tehran.

Stressful Life could become a brand for the Islamic Republic – it accurately describes the effect of its rule, not just on Rushdie but the scores of people whose lives it has blighted over the past three decades.

If there is any hope to be gleaned from this perverse video game, it is that the most vicious fundamentalists might be content to console themselves with games consoles. Next will probably be a game for killing a Danish cartoonist or crushing the Green movement, or another one called MP, where an employee of Iran’s state-owned Press TV stands for election in the UK parliament (will he manage to convince the Pakistanis of West Bradford that he’s more Pakistani than the Labour candidate?)

If video games are a vent for violent urges, then bring on the fantasy fatwa: these games should be supplied to radicals the world over.

Some years ago I spotted Salman Rushdie in a pub with his then partner Padma Lakshmi. I plucked up my courage and went up to apologise personally for the Ayatollah’s fatwa – I was very possibly the first Iranian to have done so. I was wearing stubble and a camouflage jacket which didn’t help, but I like to think Mr Rushdie appreciated the gesture.

As the West fails to hit Iran where it hurts, with infantile posturing and bluster about a nuclear threat instead of Iran’s ongoing human rights abuses, its political prisoners and its suppression of the opposition, the mullahs are having are laugh and going “Wiiiiiii”. If the West backs the people of Iran rather than war, the mullahs will fail the next level: game over.