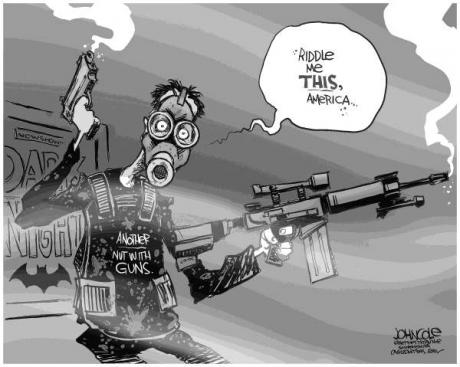 He is not a Muslim,

He is not black, he is not Hispanic, but white! An honor student “Inspiring to be a scientist” so he writes on his resume posted on Monster.com. His doctoral thesis is: “How We All Behave”

The 24 years old James Holms kills 12 people and injures 58 in a theater 2 days before the one year anniversary of Norway’s massacre.

“Why did they have to arrest him, police should’ve shot him right there?” I hear the comment by another young American boy.

Young Americans have been joining the army in large numbers for the past 10 years.

They are fighting real wars. Those who are not serving, play it on their video games.

To James Holms, the movie goers watching Batman were the Zombies.