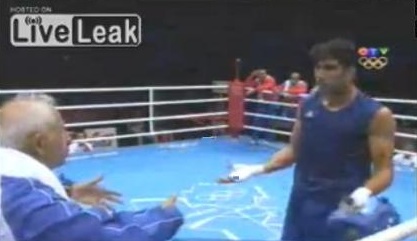 Less than two minutes into the fight, Olympic boxing referee Frank Scharmach disqualified Iranian heavyweight boxer Ali Mazaheri for persistent “holding.”  The crowd booed the referee and even the Cuban opponent Jose Larduet appeared confused by the decision.  “Holding”–where you hug your opponent to keep him from punching you,–is a minor offense to the point where boxers build fighting strategies around its use. In fact, paraphrasing one American announcer commenting on the event, at least half the matches fought during the competition would have ended in disqualifications if the competitors were held to the same standards as were applied to Mazaheri.

Here’s what HBO boxing columnist Bill Dettloff has to say about holding:  “No less an icon than Muhammad Ali, especially as he aged, got away with holding more than most. In his biggest fights, against George Foreman, Ken Norton, and especially Joe Frazier, Ali held repeatedly, typically whenever the opponent got close enough to negate Ali’s advantage in hand and foot speed.”

To be sure, holding is against the rules and not very sportsmanlike, but boxing tradition gives a lot of leeway to the referee in calling it. Each referee seems to have a different philosophy on this kind of foul. For example retired world class referee Richard Steele believes that if the opponent seems eager to fight to get away from the hold, then the holder should be penalized. But if the other guy seems to be using the rest break as much as the offender then the ref has less right to interfere.

Boxing judge Harold Ledderman has a different criterion, “If a guy gets punched in the jaw and gets hurt he’s going to grab and hold so he doesn’t get punched and hurt again. That’s not illegal; that’s human nature. You grab and hold so you don’t fall down. There’s nothing wrong with that and the referee has to understand that. The referee cannot say that that’s not allowed.” Ledderman makes a distinction between holding for survival and holding for strategic advantage. To be honest, Mazaheri’s fits in the latter category, but so do many other Olympic boxers who weren’t disqualified.

Then why was the German referee so hard on Ali Mazaheri? The answer may be because he could! Whenever there’s a regulation against an accepted tradition there’s room for double standards. The ref can be lenient to some referring to tradition and he can disqualify others by referring to regulations. Yet Mazaheri also had a part in this tragedy. He should have been careful not to give excuses to the ref to disqualify him. He failed to take into account the fact that on the international scene Iran is usually on the punishment side of the double standard. Whether the regulations deal with boxing or with nuclear technology.