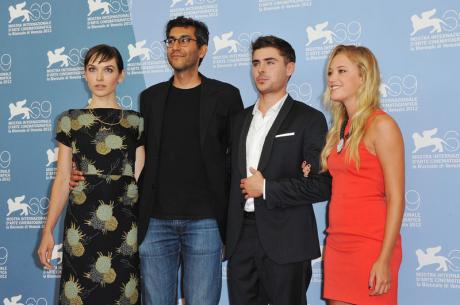 A drama centered on an enterprising farmer whose plans cause problems within his family.

‘At Any Price’ Press Conference at the 69th Venice Film Festival (original) :

Bahrani was born in Winston-Salem, North Carolina to Iranianparents. [3]  He received his BA from Columbia University in New York City. His first feature film, Man Push Cart (2005), premiered at the Venice Film Festival (2005) and screened at the Sundance Film Festival (2006). The film won over 10 international prizes, was released theatrically around the world, and was nominated for three Independent Spirit Awards.

Goodbye Solo, Bahrani’s third feature film, premiered as an official selection of the Venice Film Festival (2008) where it won the international film critic’s FIPRESCI award for best film,[5]and later had its North American premiere at the Toronto International Film Festival (2008). The film was called a “masterpiece” by numerous critics including Roger Ebert and A.O. Scott of The New York Times.[7]

In 2009, he made a short film Plastic Bag which features the voice of legendary filmmaker Werner Herzog and an original score from Kjartan Sveinsson of the band Sigur Rós. Plastic Bagpremiered as the opening night film of Corto Cortissimo in the Venice Film Festival where Bahrani was also on the jury for Best First Films. It later screened at Telluride and The New York Film Festival. In 2012 he made a music video of the song “Eg anda” for the Sigur Ros album Valtari.

MIDNIGHT IN PARIS: Darius Khondji on the Set of Woody Allen’s latest Film