The Anger Of Imbeciles

In his 1938 memoir, A Diary of My Times, French writer Georges Bernanos has this sentence that applies to so many situations in our present era of extremism: “The anger of imbeciles fills the world,”* Thus again with the terrible events in Benghazi and the riots now raging through Egypt, Yemen, Pakistan, Tunisia, and other countries.

“I’m always angry. See this row of buttons on my forehead? Push one and I’ll explode into irrationality.” This is what we hear, over and over, from various countries, mostly Islamic, mostly in the Middle East. Political correctness makes us keep saying that it isn’t so. Sorry, but it is.

I consider myself civilized. If I don’t like you, if I find you offensive or unpleasant, if you insult me or a principle I hold important, I’ll walk away—and I’ll never break bread with you. This civilized response will not be that of Tea Partiers or extremists of any sort, of anyone blinded by ideology or rigid religiosity or conservative agendas, even in our countries. Even less so if I live in Pakistan or Libya or Afghanistan or Yemen or Iran. If you insult my faith—Islam—or my Prophet—Mohammad—I’ll set fire to your house, kill you and your family, cut off your head, and feed your remains to the dogs. I will not listen to men and women of the same faith who preach moderation and compromise, who tell me that an insult or perceived insult by a cretin does not deserve a response. 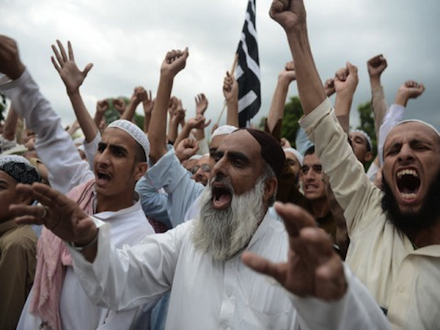 As a result, we live in a world that goes from explosion to explosion. Starting, more than twenty years ago, with the fatwa on Salman Rushdie for his Satanic Verses, going on to Danish cartoons, Theo van Gogh and Ayaan Hirsi Ali’s film, etc. etc., and now a purported movie that apparently only exists in trailer form and was made by a multi-aliased nobody. All these episodes become excuses for roaring crowds of fanatics to vow to wash the offense in blood and start clambering up the walls of the embassy of whatever country they consider guilty of transgression, generally the U.S. by default.

The U.S. has two strikes against it. First, it’s the nefarious super power that is determined to enslave all nations and impose its own laws and corrupt values upon the world. Actually, each and every one of these developing countries knows for a fact that Amreeka’s plan is to destroy it. You think Obama might be preoccupied with the economy, with healthcare, with the European Union’s decline, the shenanigans of China or Russia or his own reelection? Think again. Or ask the Islamic Republic of Iran, for example. They’ll tell you that the U.S.’s only goal is to bring about regime change in Iran and get their hands on the country’s oil.

Second strike: In backward countries with repressive regimes (yes, even the so-called “moderate” ones), populations know that nothing—and particularly no piece of propaganda—happens without official, if covert, blessing and encouragement from the state. People have no idea what freedom of expression means, so if benighted individuals in the United States make an offensive film or what-have-you, it can only be because either Obama or Hillary Clinton ordered it made and financed it to further the evil objectives of the U.S. Government.

Are these populations to blame for their stupidity or should we find excuses for them and chalk it up to historical or national-psyche causes? My rationale for saying yes, they are to blame, is that in the worse corners of the world, you find people who grew up under the same skies and in the same culture, yet have open minds and are endowed with reason and logic (never mind that they generally rot in jail or don’t live long). For the rest, master manipulators with their own agendas pull the strings of these puppets, feeding the frenzy.

A look at the recent riots in Cairo, Benghazi, or Sanaa shows us what? That an American with an equal grudge against Islam, the United States and Israel (from which country he or someone initially claimed he was) brought together, under false pretense, a bunch of would-be actors, made a semi-pornographic and completely idiotic film a few minutes long about Mohammad, put it up on YouTube as the so-called “trailer” of an actual feature film of undetermined name, and everyone went crazy. (Whether the tragic deaths of Ambassador Stevens and his three colleagues at the U.S. consulate in Benghazi are related or the result of an actual terrorist attack commemorating September 11, we have yet to find out.)

As a footnote to this post, I will add that a fallout directly relevant to the United States and the upcoming presidential elections is Romney once again sticking his foot in his mouth and accusing Obama of pandering to terrorists. But there are enough media comments on the subject and bigger questions to tackle. Such as, till when are we going to pretend that all faiths are equally respectable and all brains have the same size?