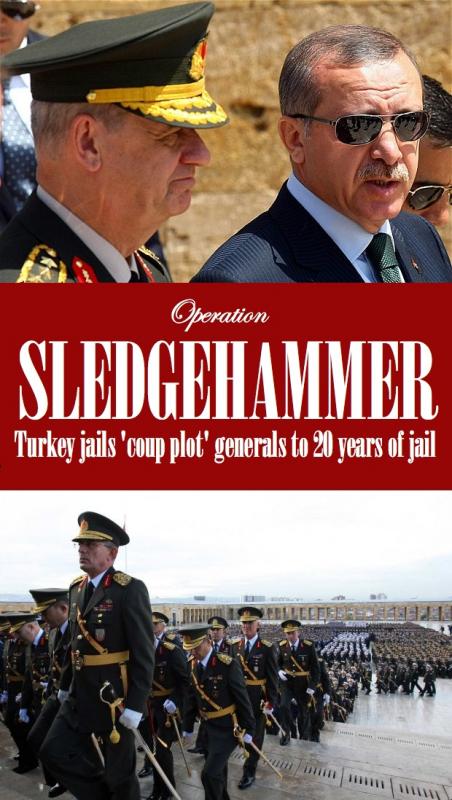 Over three hundred Turkish military officers have been convicted of plotting to overthrow their government.  Thirty-four officers have been acquitted.   Three Former army generals Cetin Dogan, Ozden Ornek and Ibrahim Firtina were initially given life sentences by the court in Silivri, near Istanbul, but then their sentences were dropped to 20 years. (Source: persianrealm.com)

Over three hundred Turkish military officers have been convicted of plotting to overthrow their government.  Three former army generals have been sentenced to twenty years in prison for plotting a coup.  Thirty-four officers have been acquitted.  Al Jazeera’s Will Jordon reports.

A trial has opened in Turkey this week over the so-called ‘Operation Sledgehammer’. 200 members of the military, including some senior commanders, are accused of plotting to overthrow the AKP government in 2003. The AKP has mildly Islamist roots, though Turkey itself and the military are secular. The government’s critics say the trial’s politically motivated, but there’s no doubt it’s bringing deep divisions within the country to the fore.

As the two surviving leaders of one of Turkey’s bloodiest coups stand trial, we ask if this will further strain relations between the country’s military and civilian leaders. Ergun Babahan, Hassan Koni and Akin Unver discuss.

A Turkish court has sentenced three former army generals to 20 years in jail each for plotting a coup.

Nearly 330 other officers – including some senior military figures – were also convicted for their involvement in the plot.

Thirty-four people were acquitted. All the defendants denied the charges.

The officers were accused of plotting to bomb mosques and trying to trigger a war with Greece in order to justify a military coup.

Former army generals Cetin Dogan, Ozden Ornek and Ibrahim Firtina were initially given life sentences by the court in Silivri, near Istanbul, but then their sentences were dropped to 20 years.

The defendants denounced the evidence as fabricated and accused the government of carrying out a witch-hunt against the armed forces.

He is accused of being the mastermind behind the 2003 alleged plot.

“Here we see a process unfolding to make the soldiers of Mustafa Kemal (Ataturk, the founder of modern Turkey), who give their lives for their country, to pay the price of their commitment to the republic and its principles,” he said, according to court documents.

Prosecutors say “Operation Sledgehammer” was a conspiracy to trigger a coup against the elected government of Recep Tayyip Erdogan.

Turkey’s military has long seen itself as the guarantor of the country’s secular constitution.

It staged three coups between 1960 and 1980 and has a history of tension with the Justice and Development Party (AKP) of Prime Minister Erdogan.

The former head of the Turkish armed forces, Gen Ilker Basbug, has become the biggest casualty yet of a huge crackdown on alleged conspirators against the government which has brought hundreds of military and security officers to trial.  The BBC’s Bridget Kendall examines the issues behind the so-called Ergenekon plot and other related cases.

MUCH ADO ABOUT NOTHING: Arham Sadre on his «heroic» deeds during the ’53 «Coup»

YES, PRIME MINISTER: A Step By Step  Guide To Mossadegh’s Premiership and the Coup of ’53 …

BEHIND CLOSED DOORS: Mossadegh and FM  Fatemi in Secret Talks On Eve of Coup ‘ 53