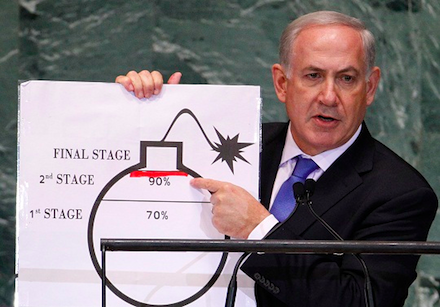 President Obama, in an unusual move, rejected Israeli Prime Minister Benjamin Netanyahu’s request for a meeting during his visit to the US for participation in the annual UN General Assembly in New York. The Israeli newspaper, Haaretz, quoted an Israeli official saying that Netanyahu’s office sent a message to the White House stating that although he would spend only two and a half days in the US, he is prepared to travel to the US capital to meet with President Obama. “The official added that the White House rejected the request and said that at this time Obama’s schedule does not allow for a meeting.“ However, following a series of publicized disagreements between the two countries, the rejection is viewed by many observers as a reaction motivated by something deeper.

On September 11, in response to US Secretary of State Hillary Clinton’s statement that the US would not set a deadline for Iran’s capitulation to halting its nuclear program, Netanyahu said, “The world tells Israel ‘wait, there’s still time.’ And I say, ‘Wait for what? Wait until when?’” He added, “Those in the international community who refuse to put red lines before Iran don’t have a moral right to place a red light before Israel.”

Netanyahu has indicated that because negotiations with Iran are deadlocked and that country continues its nuclear program, Israel is considering a strike against Iran’s atomic facilities before its nuclear capabilities reach a threatening and irreversible point. The official US position is that sanctions are imposing a great deal of pressure on Iran’s economy and the country is still far away from acquiring the capability to build an atomic bomb, therefore time should be given for diplomacy to work.

While Netanyahu has been overtly goading the US into a war against Iran, the rationale behind his strategy, as officially stated, is highly questionable. There is nary a report supporting the idea of attacking Iran’s nuclear facilities as a remedy to Iran’s nuclear crisis. Common wisdom dictates that bombing Iran’s nuclear facilities may inflict heavy physical losses to the country’s nuclear program but would not eradicate Iran’s indigenous nuclear knowledge. A report published on September 13, 2012, prepared by a bipartisan expert group, concludes that a unilateral Israeli attack would set back the Iranian nuclear program by two years and an American attack, by four years. Additionally, the most likely results of such an attack will be the intensification of confrontation between Iran and the US, Iran exiting the Non-Proliferation Treaty, and probably deciding to acquire its own nuclear arsenal.

Logically, Netanyahu’s intense political maneuvering to entangle the US in a war against Iran cannot simply be to destroy Iran’s nuclear facilities, which in effect will culminate in nothing more than temporary pain relief followed by unfavorable consequences. His intention, at a minimum, is to eliminate the risk of Iran’s nuclear weaponization permanently. How can this be achieved? The aforementioned report concludes that if the objective is, “ensuring that Iran never acquires a nuclear bomb,” the US, “would need to conduct a significantly expanded air and sea war over a prolonged period of time, likely several years.”

It is this scenario from which the Obama administration chooses to distance itself. In this respect, Netanyahu has received a clear and unequivocal message that if Israel attacks Iran, it will be on its own. As a result, although Netanyahu’s long term plan is to involve the US in a war with Iran and destroy that country, this would not be an attainable goal at this point. This has led many observers to believe that Netanyahu’s escalation of Israeli-US tensions in recent weeks only benefits Obama’s opponent, Mitt Romney, who is not doing well, and complicates the situation for Obama by weakening his support among pro-Israel forces, as the US presidential election enters its final lap.

The Jewish Daily Forward editorial notes, “It’s difficult to recall a time when an Israeli prime minister has inserted himself into a presidential election campaign in the way that Benjamin Netanyahu has. It’s even harder to recall a time when a trusted ally openly urged the American president to undertake a questionable, unpopular and highly risky war.” A recent poll conducted by the nonpartisan Chicago Council on Global Affairs shows that, “only 38 percent [of the Americans] say the United States should bring its military forces into the war on the side of Israel. A majority (59%) says it should not.”

In an interview with the Jerusalem Post, Netanyahu rejected accusations of trying to influence the outcome of the US elections in favor of Mitt Romney, saying they were “completely groundless”. However, Yossi Verter, writing in Haaretz, revealed that, “a very senior Israeli figure” that is in close contact with the US administration, “relates in private conversations that in the eyes of the Democratic administration, Netanyahu is perceived as campaigning on behalf of Mitt Romney.” The article continues, “To the president and his aides,” recent maneuvers by Netanyahu, including his cooperation with Republican Congressmen against the White House, look like, “crude, vulgar and unrestrained intervention in the US election campaign.” Obama’s decision not to meet with Netanyahu may be explained in this context.

The current developments with regards to Netanyahu overestimating his strength not only may result in his major defeat but could also trigger dramatic changes in Israel, the US, and the relations between them, if Obama wins. First, if Obama is elected he will most likely, in a tougher tone, try to establish the fact that when the interests of the two states do not coincide, the US is not going to put Israel’s interest ahead of its own. In a September 23 interview with CBS’s 60 minutes, Obama clarified this, stating, “When it comes to our national security decisions, any pressure that I feel is simply to do what’s right for the American people”.

Second, if Obama is re-elected, Netanyahu’s gamble in all likelihood will backfire, he and the Likud party will be weakened, and his moderate rivals will rise in Israel. It is hard to fathom how Netanyahu can lead Israel while there is a widening rift between him and the president of Israel’s closest and most powerful ally.

Third, the likely rise of moderates in Israel, coupled with Obama’s freedom from disquietude upon re-election, will pave the way in reaching a negotiated solution for the years-long impasse over Tehran’s nuclear program. This will prevent a calamitous war between Iran, the US and Israel.

And last but not least, Obama’s position is a dramatic departure from the tradition of unconditional support for Israel during US presidential campaigns pursued by candidates. Referring to Israel’s maneuvers, in his September 23rd interview, Obama asserted that he was “going to block out any noise that’s out there.” When it comes to Israel’s security, Obama said that he would consider it because he felt “obligation,” not “pressure.”

Now, if Obama wins the election this would deliver a significant message and set precedence, especially for presidential candidates in the future, that one may still be elected if he or she conducts meaningful and patriotic dialogue with the American people while rejecting pressures imposed by Israel’s hard-liners and their supporters in America, the so called pro-Israel lobby. The outcome might impact future presidential campaigns, as well as US foreign policy, because it would alleviate the pressure that candidates and presidents felt were they to be deprived of the pro-Israel lobby support.

It is noteworthy that despite tensions between Obama and Netanyahu, Obama still has a significant lead amongst the American Jewish voters. According to the latest Gallop poll, 70% of likely Jewish voters have decided to vote for Obama. In another poll conducted in Florida, one of a few key swing states that could decide the outcome of the election, 69%of Jewish voters support President Obama.

If Obama wins re-election one thing is almost certain: the foreign policy of unwavering support for Israel will be replaced by unambiguous deference to US national interests. This scenario would moderate Israel’s policies, ultimately contributing to the security of the region and the world as a whole.

This article is part of Insider & Insight, a new AIC program aimed at providing different perspectives and analyses on key developments in US-Iran relations. The commentary and opinions expressed herein are solely those of the author and do not reflect the official position of American Iranian Council.