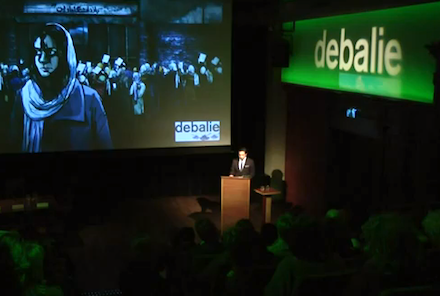 Thanks to Human Rights Watch a full auditorium in Amsterdam discussed on Tuesday 25 September 2012 about the struggle of Iranian people for freedom. An evening with interesting discussions with Marieke Schaak as the Member of European Parliament and the screening of the imposing documentary “The Green Wave” about the Green Movement. This event
was initiated to reach out to a broader public beyond the inner circle facilitating exposure to – and discussion around – an issue of key importance to HRW and to the human rights community more generally. The opening of the evening was in my hand; below the text of my introduction:

For me, this is a very special evening. Let me emphasize that: it is unique! While the whole world is immensely concerned about the Nuclear Iran under the Ayatollahs, we are together to hear the voice of The PEOPLE of Iran. And the recent blossoming of their two centuries of struggle for Freedom: the Green Movement.

After three years, even the regime agrees, that the Green Movement was a turning point for Iran. Even though they keep calling the movement afitna (meaning evil), its momentum: politically, its depth: historically and its latitude: culturally concludes in only one desire: a peaceful political transition to democracy. That is why: “Where is my vote?” became the slogan during the uprising of 2009.

There are moments in history that seem perfectly ordinary to the world, yet those moments will shake you personally to the core. It stops being another item on the evening news; it infiltrates the fiber of your being. The political becomes personal. Those of you who are Iranians can relate exactly this feeling, remembering the 12th of June 2009. The Presidential Election Day in Iran.

Elections in a country like in my native Iran were always a game. Government holding all the cards making up numbers to guarantee its illegitimacy by holding “elections”. Off course, the ballot exists out of 500 versions of the same party. 500 shades of Islamic fundamentalism.

No one is actually campaigning with dreams that matter. No candidate puts women’s right issues on the ballot; no one is arguing the rule of sharia law. A vicious cycle of choices between bad and worse, continues the ongoing game. Though, what made the elections of June 2009 unique was actually quite subtle yet had huge impact: politically, culturally and historically.

A week before the elections for the first time; historical state-televised debates between candidates. Everyone was talking about these elections. People who had been boycotting the government for many years, even friends in the Netherlands for the first time in years talking about casting a vote, for the “oppositional “ Karoubi or Mousavi – the later ‘Green’ leaders of the movement.

This election became a game changer. The Iranian people realizing that the right to vote given to them in order to legitimatize the rule of the IRI in Iran was now their tool to limit that same government’s power.

The Iranian people called their bluff and for the first time instead boycotting elections, they actually participated in overwhelming numbers. Never before was an Iranian presidential election this exciting: the dictatorship forced to obey the power of voters.

I personally couldn’t sleep for 48 hours, comparing poles. Making screen shots of Iranian states web sites. Then the anticlimax of the stolen election, Ahmadinejad winning by 63 % within 6 hours after the start of elections. “That’s impossible”, was my reaction. I now remember it in flashes a slide show tits and bits of information.

Reports of election fraud. Discrepancies voting districts accounting for up to 300% participation if not more. An entire nation in collective shock. People’s outrage over flowing to the streets. demonstrations from Enghelab street to Azadi. (From revolution street to freedom street).

Reports of violence against protestors by bearded men in plain clothes. Then the Images of young people on the streets wearing green scarfs and ribbons, even green painted faces. grown men beating these kids on the streets. And then a YouTube video of a beautiful young girl falling to the ground. passers by trying to help her while she spits up blood, the fear in her eyes just a moment before her eyes role back in to her head a man’s voice calling out her name “Neda, Neda…”

What drove these people to the streets? They sought a simple answer to an infinitely simple question: ”where… IS… my… vote?”

What could we do? Half away around the world. We organized support in The Netherlands, the media sympathized, the governments (e.g. the Dutch Parliament devoted a 1 million euro financial aids to free the internet), actually the whole world supported the Iranian People. Except the most important actor: Barack Obama (his wrote letters to Khamenei during those days ensuring him the cry of the Iranians, he does not hear, and what he does not hearing, it is not his business).

One thing was for sure, nothing was ever going to be the same again politics wasn’t an affair of politicians it had become even more personal than it was before that moment. It wasn’t just people’s minds that had changed. People’s hearts had changed and that was reflected in the works of artists, poets, moviemakers and politicians. Never before were we witness to such a grass root movement. Average people in protest. the thought that we played your game, your rules, and your candidates and still my voice was being muffled away in the static.

Now, three years later we don’t hear a lot about the struggle in Iran. It is very understandable if you would ask: “Is the Green movement dead?

My firm answer to your question is: The Green movement is not dead, it’s merely hibernating.

The most important virtue of the Green Movement is the institutionalizing of civil power: the power of votes. And the willingness to accomplish changes by “Free Elections”. This is totally different than what we observe in the Arabic Revolutions.

Let me summarize by answering the question of “what can we do to help?”

All initiatives of the stakeholders involved (e.g. EU, US, NGO’s like Human Right Watch among others and activists) must encourage this promising discourse: the demand for Free Elections in Iran.

That is the only way!