Iranians are stocking up to fight and defeat Ayatollahs 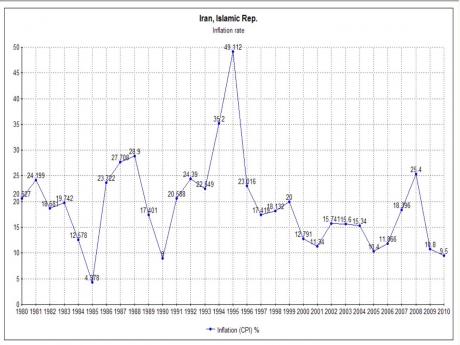 About twenty years ago, someone asked me, “Ali, if you were the person who was behind the microphone, and they asked you to tell people one thing, to save Iran from the Ayatollahs’ grip, what would you do?”

Now I am well known for my non-stop twittering. I drive people mad with non-stop blabbering, but I went the other way. I said “Stock up”. They thought I said that they were stuck up.

So it is refreshing to read this comment by a prominent person in the field of hyperinflation:

“Iranians are rationally stocking up on basic necessities. This increased demand for goods today, in anticipation of higher prices tomorrow, also puts upward pressure on prices today. As previously described, the supply of such goods has also gone down. In consequence, Iran is witnessing both an increase in demand and a decrease in supply – a recipe for staggering price increases i.e. hyperinflation.”

In those days, we did not have the threat of inflation, in fact at some point we even had deflation. But the way to overthrow the Ayatollah economic system was the good old national strike. Nothing ingenious there really. Very easy to say, but almost impossible to carry out. But it is happening now.

My idea was that we all start to ask the question, “what can the Ayatollah economic system do, if people did not shop or participate?” I remember telling our King in exile, and he thought I was nuts. Now he is advocating non-violent resistance, and non-participation. The internet had just started and we were all raving on the various bulletin boards, and the regime would attack the forums and shut us down. Oh yeah it was madness, but we persisted. Those were the days! We defeated the mainstream media.

People would say. “Ali Agha neshesti kharej dari chaiee Earl Grey mikhori”, which translated means “Ali your are sitting comfortably outside Iran drinking Earl Grey tea, and spewing foreign unrealistic delusional ideas”. They were right of course, but there are only two ways to take the mullahs on. Either you draw your sword, or you paralyze them at the source, and use non-violence. We now are doing both.

The toughest nut to crack was their own distribution system. They heavily subsidized the staple goods, like bread and rice, and fuel. Then they kept people busy in long queues for basic stuff to run their household. The mullah households and IRGC household had no problems. Their lavish lifestyle made the Shah’s people look poor. So Iranians set up another system.

People said “Ali agha boro too setarehat”, or “Ali go into your stars!” Well I have to say that the situation now is just how I expected it to turn out. The sanctions on the IRGC and mullah households will be enough to stop them from enjoying their life. The people will have had their own network of smugglers nourishing their economy and the people are stocking up. And it is all thanks to Saturn in Scorpio, it hit the rulers. The people are slowly building the base.

In Iran, most homes have huge basements. The people have the natural ability to hoard food and energy. So the trend will be, as the article points out, to rush out and hoard loads of basic needs. The source will be from the alternate economy that is out of the mullahs hands. Persian Pirates will be feeding Iranians that need it. More on Persian Pirates at this link.

People will not need to go and stand in a bread line. The black market will selectively distribute the food and energy. The Ayatollahs will be stuck, as their source is being sanctioned. Yes there will be hyperinflation in the mullah economy, but not in the alternative economy that no one knows anything about. It is a traditional barter trade system, and is attached to gold. Nevertheless people will stay at home more, as unemployment will rise.

Mum and dads will be eating and sharing their food, with not only their young children, but the older children, and their grand children. The pensioners will be up in arms. Families will argue amongst each other about not being able to get work. Reality will hit hard, as the few who could do deals with Ayatollahs, can’t. Suddenly everyone will realize, it is not just their family, it is the whole street. It will be tough, but not as bad it is for the Ayatollahs.

At the other extreme, the Ayatollahs’ families will start to feel the pinch, as their exclusive cargoes do not arrive from Dubai every morning. The Persian Pirates will not feed them. Their whole network will start to reel. At that moment, no religious sermon, or some stupid phrase like “blame it on Israel or USA” will make any sense. With their stupid self selection coming in the spring, they will watch empty polling booths. People will argue about the economy, and the economic debate will get nowhere.

In fact the Ayatollah oligopoly will start to shatter. They will implode without any interference from the people. The people will have their own solidarity and they will just watch the Ayatollahs tear each other apart. The power will only be in the hands of the secret Persian Pirates, who have the only means to feed the system. That is when the Ayatollahs will be strangled and have to move to Najaf and stay there to feed their families. They regard that land as holy, in just the same way the people of Iran regard Iran as holy. It will be an amicable separation for good, Ya Ahura!