DO NOT INSULT NASREEN SOTOUDEH 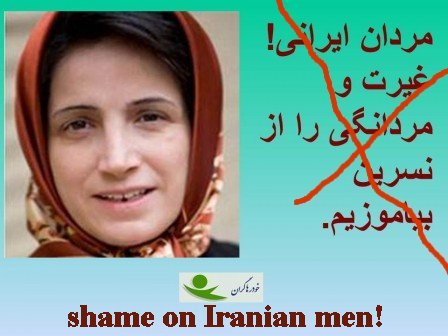 Those who are running the site “khodrahagaran” have written the follwoing insulting sentence beside the picture of Nasreen Sotoudeh.

The whole respect and solidarity . I have with Nasreen Sotoudeh is because she has an admirable Femininity, which historically have been used for peace, resistance, common sense and justice. What have men with this stupid “Mardaanegi” have done?” Throughout history, they have created wars, raped women and children,
massacred villages and towns. So, I needed to enlighten some Iranian men.

I am telling them:.please stop insulting our best women by declaring that they have more masculinity than
men; implying that their struggle, resistance, going through tortures and humiliations is because of her Masculinity and honour. Do you even know what masculinity in psychology and sociology mean?

I am sure you don’t.

In the tribal male chauvinistic Iranian culture, everything good is part of this so-called masculinity, which we haven’t seen and don’t see anywhere but from the 10th, 11th, 13th centuries’ writings. Or are you sticking to the LUMPEN meaning of masculinity and gheirat that leads to the honour-killing of women and girls?

As an Iranian woman I am telling you to STOP INSULTING NASREEN SOTOUDEH BY STICKING HER BRAVE STRUGGLE AGAINST THE FASCISTS IN IRAN TO THE STUPID NOTION OF MARDAANEGI, WHICH ONLY EXISTS ON PAPERS, IN SOME BACKWARD Iranian MINDS, HAS NO REALITY, AND IS USED AS GLORIFICATION OF MEN WHO CREATE WAR AND MILITARISM, torture and rape women and children and order some sick women to participate in their savage masculinity.

NO, IRANIAN MEN NEED TO LEARN FEMININITY FROM NASRIN SOTOUDEH AND WIPE FROM THEIR MINDS THE LUMPANIST IDEA OF MASCULINITY TO BE ABLE TO COME TO THE 20TH AND 21ST CENTURIES.

I will soon be publishing articles on IC about masculinities and femininities in Persian, as I see that you Manouchehr and many other Iranians could not read or understand my series of article on “Conceptualizing Gender” in English.