It was  amusing and a bit odd to watch the crowd of spectators in an Iranian basketball arena chanting “Kevin, Kevin.” Rarely in U.S. media do we see footage of Iranians chanting anything  but “Death to America”–or something along those lines.  Yet after watching the character driven documentary The Iran Job (directed by Till Schauder and produced by Sara Nodjoumi) I was equally impressed with Kevin Sheppard, the American Virgin Islander who took a job in Iran to play professional basketball.  As Kevin transformed his  team from bad news to a position of respect in the league, he was in turn transformed by Iranians to gain greater respect for the hard-fought freedoms in his own country.

At the film’s start Kevin’s outlook is very different from that of American Black athletes of the civil rights era, Muhammad Ali Clay,  Jim Brown, Bill Russell. They were politically outspoken because they had been robbed of their human dignity. They couldn’t drink from the same water fountain or stay in the same hotel as their white teammates.  Football great Jim Brown was offered a Syracuse scholarship on the condition that he didn’t have affairs with white women on campus. It’s different today with institutionalized racism abolished and an African-American in the White House. Today in America, Kevin can be a sports hero without the baggage of oppressed crowds expecting anyone with an audience to become their voice.

Things are different in Iran. The country doesn’t have a race issue of the same magnitude as the U.S. used to have but gender segregation just as severely robs Iranian women of their human dignity. Kevin lends a sympathetic ear to his Iranian friend, Hilda, as she explains that she is legally worth half a man. Hilda is a physiotherapist at the clinic where Kevin went to treat a sports injury. Later Kevin meets two other young women through Hilda, the stunning Elaheh, an avid basketball fan whose family won’t let her act in the movies, and the well educated Laleh with a glass ceiling no higher above her head than the hejab she must wear The three women are surprised and impressed by Kevin’s natural sensitivity and understanding, and, like it or not, they drag a reluctant Kevin into social awareness. Kevin finally reaches his adult coming of age during the 2009 Green Movement uprising.

He says in a later interview, “…as an African-American…I can kind of relate to what they’re going through and see. So I think that’s why we had such a strong connection, because I shared my views as well with them. Being an African-American and what we had to go through in America to get the rights that have today. The fact that we went through all the Civil Rights Movements and all that. It was like I could say a parallelism or something like that. That these women were starting to get like that. I mean they were starting to go out and protest. They were starting to make their voices be heard. Young ladies like those three young ladies were starting to go out there and holding up signs. You saw the Green Movement of what happened with the young lady that got shot, Neta [sic]. So I mean the women themselves was really basically getting fed up with what was happening in the country.”

Today, the once apolitical Kevin Sheppard runs a non-profit basketball organization. He says, “Right now I have problems in my own country with many kids dropping out of high school. Bad in the Virgin Islands, especially with the economy. Crime has risen. What I do with my non-profit organization is provide a platform for kids to come off the streets and come to play. Once I get their attention, I push them in directions so they stay out of trouble.”

Thanks to his experience in Iran Kevin seems to now understand that the civil rights activism of Clay, Brown and Russell in the U.S. hasn’t vanished, just transformed. To protect what was gained during the Civil Rights era, political energies have gone from fighting against what is wrong to fighting for what is right. These days as internal forces continue to erode the rights of American citizens, this is perhaps the most useful message that The Iran Job has for its American audience: guard your liberty because getting it back is a tough job.

Note: Laleh’s request for a U.S. visa to attend the film’s opening in Los Angeles was declined. 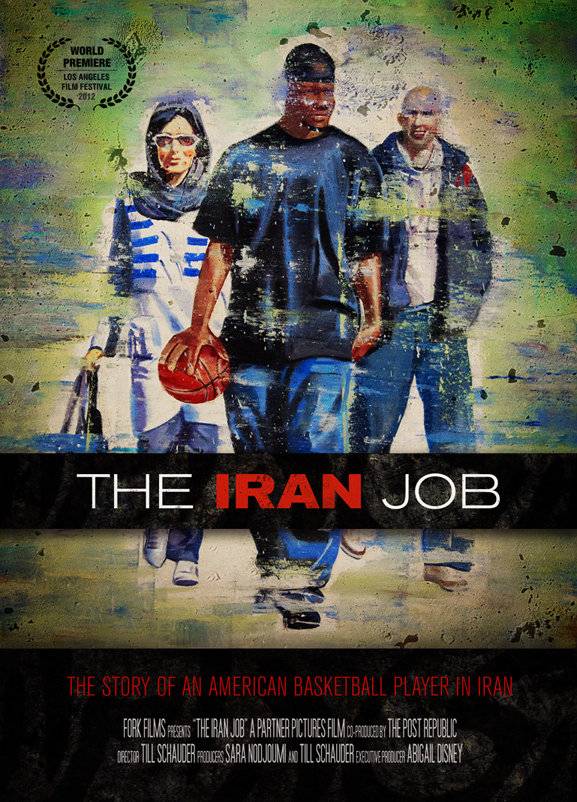