When The Ties That Bind Iranian Families Together Are Severed, Part1

No book has so cogently identified and better analyzed the issues related to and the costly consequences of split families than The Golden Cage by Dr. Shirin Ebadi. She tells the melodramatic story of a family that was close to hers, a family that had to deal constantly with the challenges that were caused by divisions that ultimately led to its degeneration. The story details the intricate events related to Abbas, Javad, and Ali, three brothers who were locked in a “golden cage” of dogmatic ideologies that created nothing but hostility among them and eventually shaped their fatal destinies. The three brothers were totally immersed in attitudes that were molded by the intolerant political system of the country and from which they found it impossible to free 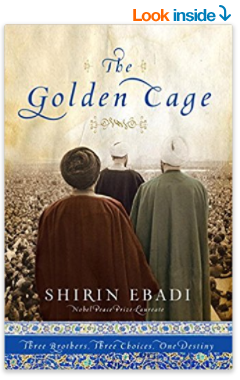 themselves and reconcile. In other words, the political system created an environment that allowed members of the same family to turn hostile toward one another.

The father, Hossein, was always determined to keep the family intact; however, once he died, the family started to tear apart. The surviving members divided his assets and the oldest son, Abbas, spent his share of the inheritance on the purchase of an apartment he and his wife eventually moved into. Despite his father’s wish, Abbas entered the military academy and, after graduation, became a decorated army officer and a staunch supporter of the monarchy. He believed that the country could not survive without a king and wanted his children, Borna and Arya, to have the same pride in a monarchical regime as well.

Initially, Abbas was a caring man who always assumed responsibility for the other members of the family, especially for his younger brothers. Owing to his unbridled loyalty, he was soon promoted to the rank of general despite the fact that he was still too young for that position. This promotion strengthened his devotion to the Shah’s regime and intensified the distance between him and his immediate younger brother, Javad, who was a believer in Marxist ideology. Gradually, Abbas, the once caring older brother, was transformed into a serious, strict, less caring, more demanding, and more opinionated man. Fearing for his life, soon after the Islamic revolution succeeded in Iran, he and his family moved to America and settled in California.

Javad was an opinionated young man who always fought for his Marxist ideas and had a deep ideological difference with his older brother Abbas. He disagreed with his brother’s decision to enter the military academy right from the start. Surrounded by friends who were active in the Toudeh party, Javad decided to become a ranking member of the party and never imagined that this decision, which seemed so innocent at the time, would contribute to the disintegration of his family and lead to his fatal destiny. The two brothers were so at odds with one another that when Javad gave a birthday gift book to Borna, his brother’s first born son, Abbas returned the book and blamed his brother of trying to brainwash the little boy. The schism between the two elevated over time. Each was stubborn and unwilling to give up what he believed in to the point where they became like enemies and every shred of affection between them evaporated. The rift was purely ideological; but what seemed to be a doctrinal disparity turned into personal hostility and mutual bashing that intensified after the Islamic revolution was gaining momentum. The ensuing political atmosphere allowed brother to turn against his own brother.

Javad was arrested and imprisoned by the Shah’s secret police when he was a very young man. His brother, Abbas, now a high ranking army officer, refused to help and thought that it was time for his younger brother to learn a lesson and not associate with those he deemed to be the wrong crowd. Abbas was in fact humiliated to have a brother who was against the monarchy and, therefore, felt he deserved to be in jail. Javad remained in the Shah’s prison for about a year. When he was finally released, physically he was a broken and considerably frailer man; however, mentally he was more resolute than ever to oppose the regime and pursue his Marxist agenda. For a short time, he unsuccessfully searched for a job and then decided to move to Rasht, leaving his family behind and causing further division. He found a factory job in Rasht, but after a few months he quit and moved back to Tehran and restarted his political activism.

Ali, the youngest brother, became a loyal aficionado of an erudite mullah who was his mentor as well as an agitator. Brainwashed, Ali followed him everywhere like his shadow and, at a very young age, became the son-in-law of another prominent clergyman. Ali was so religiously devout that he requested that Ayatollah Khomeini himself recite the religious sermon at his wedding and later named his first born son after him. Although he was still young, Ali became a sworn Islamic fundamentalist. This was critical at that time because the bourgeoning anti-Shah uprising that was orchestrated by mullahs was gaining strength. Javad was also at odds with Ali. Once, while he was asleep, Javad tried to shave off Ali’s beard—the symbol of religious faithfulness in Iran. Javad complained that Ali’s beard was disgusting and you could smell it as you got close to him. The three brothers had pursued their own separate ways of life and were so much at odds with each other that they could not be in the same room without generating antagonistic encounters.

After the Islamic revolution succeeded, the brother’s ideological bickering spiraled to the point that it ultimately tore the family apart and forced their mother, the only surviving parent, into a very awkward situation. Forging an alliance with an Islamist, a communist, and monarchist was a truly impossible task.

Javad was arrested again, this time by the newly established Islamic government, and was charged with affiliating with the outlawed Toudeh party. Ali, his younger brother and now a high ranking official of the Islamic Republic, refused to lend even the slightest helping hand or bail out his brother. Javad, the stubborn ideologue, was imprisoned by the Islamic regime. As we say in Farsi, he became like a chicken slaughtered for both wedding and funeral ceremonies. He was so enslaved to his beliefs and so loyal to his cause and the party he belonged to that he did not want to ask the Islamic authorities for forgiveness despite his mother repeated requests. Like his brother Abbas, he found himself without a home, a family, and now without a purpose. Sadly, Javad was executed by the Islamic government based on fabricated charges that he was a communist traitor. He was only 31 years of age at the time of his execution. An official of the Islamic Republic told his mom and his only sister, Pari, that there could not be any memorial for Javad and his body must be buried privately with no ceremony. Imagine the kind of horror that fell upon the old lady and what kind of life a mother lived after the death of her son. She raised three sons and never imagined that all of them would end up fighting constantly over their beliefs and going their own separate ways.

The execution of Javad devastated Pari, the only daughter of the family, but the dreadful effects were not limited to family. Pari was being singled out at work, and her colleagues at the university where she taught started to ostracize her. Things got so ugly and the work environment became so unbearable that Pari had no choice but to abandon her job. She had no reason to remain in Iran, and later left Tehran and went into a kind of self-exile in London.

The family was then completely separated—Ali was part of the government and unreachable; Javad was executed; Abbas was in California; and Pari had moved to London. Their tormented mother helplessly watched her family melt away. She remembered the good old days with wistfulness and regret. Her sons were so unbending in their beliefs that they seemed no longer to exist as brothers. All three of them succumbed to the dreadful fate they created for themselves and perished as a result.