Why Can’t Iran And The U.S. Just Be Friends?

According to a 2015 Pew Research study, 75% of Americans dislike Iran. Why Iran? The country is a repressive theocracy, and angry Iranian mobs held 52 Americans hostage for 444 days, in 1979. Still, Shiite Iran is more like democratic America than is Sunni Saudi Arabia. Iran allows women to drive, to watch the sporting events, to run their own businesses and to be elected to public office. Human rights violations are far less common and far less intense than in the US-supported theocracies of Saudi Arabia, Bahrain, United Arab Emirates, Oman, or Turkmenistan. Between 20,000 and 30,000 Jews live in Iran – the largest Jewish population in the Middle East outside of Israel.

More important, Iran unequivocally opposes ISIS, Al Qaeda, the Taliban, and other militant Sunnis. Indeed, Tehran helped America recapture Mosul, among other ways they intervened in quelling ISIS. While the Saudis covered up their links to the 9/11 attacks, the Iranians rescued downed American pilots and helped America’s military ally, the Northern Alliance, in the US invasion. The media says it’s Iran’s nuclear program that frightens America. Yet, both Israel and Pakistan have developed their own nuclear arsenals – and refused to sign non-proliferation treaties. Israel, in fact, has somewhere between 80 and 200 missiles, with nuclear warheads that could send Iran back to the Stone Age in seconds. So what is it about Iran that caused George W. Bush to call it part of the “axis of evil”, Hillary Clinton to tag Iranians “her enemies”, and Donald Trump to slam it a “murderous regime”?

In 2010, Nobel Prize–winning economist George Akerlof and Rachel Kranton came out with a theory called Identity Economics. This theory says that contrary to the thesis of conventional economics, it is our identity that makes us invest in certain choices and actions.

As the scientists elaborated in their article “Economics and Identity“, published in the Quarterly Journal of Economics, 2010:

“People behave in ways that would be considered maladaptive or even self-destructive by those with other identities. The reason for this behavior may be to bolster a sense of self or to salve a diminished self-image.” (p.2)

People want to fit in. It feels good when you conform to your culture or group and are accepted. The more you fit in, the more popular you become. That makes people feel even better.

In America, it is acceptable to “hate” Iran. In Iran, it is acceptable for Iranians to shout “death to America”. Each country demonizes the other. America says that Iran is an irrational actor, the very thesis of evil, and cannot be entrusted with the technology used to develop the world’s most destructive weapons. Iran’s various presidents blamed the United States and Britain for creating ISIS, for implementing 9/11, and for emptying clouds to produce rain shortages in the Middle East, according to the organization Iran Business Risk. Iran’s semiofficial Fars News Agency reported that since 1945 space aliens from Nevada run the United States. 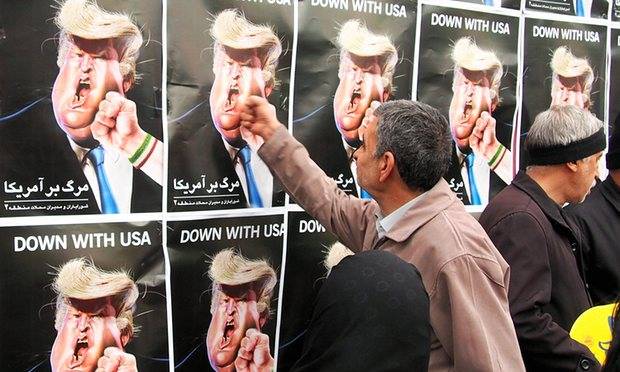 We live in an age of news bombardment with no time to filter true reports from false, and maybe we don’t even bother to want to. As Trump with his marketing acumen knows, we’re too comfy to challenge news that makes us feel good and that reinforces our views. It’s easier to call such news “fake”.

If the dominant media and leaders of one country routinely blast another nation, we’d like to think there’s reason for their allegations. Our identities drive our persuasions.

Why Iran? Why not Iran? As many political commentators say, Iran’s the perfect scapegoat for America’s leaders to divert attention from the catastrophic consequences of U.S. intervention in the region. The leaders can count on a shocking amount of citizens to push their wrecking ball further.

Seems to me, we need the space aliens of Nevada to intervene.