Zoroastrianism, as one of the oldest religions still in existence and probably the world’s first monotheistic faith, had been the state religion of three Persian dynasties, while shaped one of the ancient world’s largest empires—the mighty Persia Empire, before the Muslim conquest of Persia in the seventh century A.D.

Although it was the dominant religion in Iran, Afghanistan, and central Asia, today Zoroastrians remain primarily in Iran, India, and Pakistan.

To highlight the impact of Zoroastrianism on western thought and the other religions in the world, we conducted an interview with Dr. Philip G. Kreyenbroek, professor and Director of Iranian Studies in Georg-August University of Göttingen (1996-2017).

Q: Some believe that the book of Avesta does not represent teachings and philosophy of Zarathustra as it was compiled in the Sassanid era for nearly 300 years and eventually it formed a set of beliefs and rituals were common among Iranian religions in that time. Hence, this book is neither heavenly nor represents the thoughts and teachings of Zarathustra. what is your opinion?

A: Only the Gathas are the words of Zarathustra. He was the founder of the Zoroastrian religion (daena, din) so that other Zoroastrian texts were either adapted to his teachings or originated after him. These ‘later’ texts represent the way Zarathustra’s followers understood his teachings in the light of their contemporary culture and experiences. This is inevitable, especially in the case of teachings, like those of Zarathustra, which are not easy to understand. Over the ages, these later texts have been recognized as holy expressions of Zoroastrianism by the communities in Iran and India. However, anyone is free to choose to base his or her religious beliefs on Zarathustra’s message alone, as some Zoroastrians now do.

Q: To what extent Zarathustra has an impact on Western philosophy and thinking? Do you regard that Nietzsche and Aristotle were influenced by Zarathustra?

A: In my view, the great revolution in human thinking that Zarathustra brought about was the recognition that this world was not as God had intended. In earlier religions, people believed that the conditions in this world represented the will of ‘the gods’, and all that a human being could do was try to befriend the gods so that they would not harm him. Zarathustra, on the other hand, taught that there was one pure and heavenly Creator God, who had created what we might call the ‘algorithms’ (manthra) for a perfect world. However, these divine laws had not been realized correctly in this world because an evil power also existed. The task of humans, therefore, was to follow the will of the Creator God (Ahura Mazda), and the Angels who represented him in this world, in order to make the world perfect.

This new worldview (or divine message) helped to advance human thinking (as people’s thought and actions were seen as important for this first time) and spread far and wide. It is implicitly present in Christianity and other later, ‘Abrahamic’ belief systems.

Zarathustra’s message seems to have impressed the Greeks, who had many contacts with Iranians under the Achaemenids and later, and may have influenced Plato (there is no agreement about this among specialists). I doubt if Aristotle was much influenced by this, but I am not a specialist on Greek philosophy.

Nietzsche knew about Zoroastrianism because he was a close friend of Lou Andreas Salomé, the wife of F.C. Andreas. Andreas was one of my predecessors as Professor of Iranian Studies in Goettingen, and he had worked on ancient Iranian texts. Nietzsche regarded Zarathustra as the first ‘moralist’ (because man chooses between good and evil) and himself as the first ‘a-moralist’. This apparently led him to choose the title ‘Thus spoke Zarathustra’.

A: This is almost entirely correct. From ca. 3000 – ca. 2000 BC, the Indians, and Iranians were a single people, who had their own religious tradition. Around 2000 BCE these two groups separated, and each presumably kept and developed their common, Indo-Iranian religion. Zarathustra was a highly educated priest in that Indo-Iranian religion, but probably because of social pressures in his community he proposed the new interpretation I outlined earlier. He did not reject the whole Indo-Iranian tradition, however, only one group of ‘angels’, the daeva, (diw), whom he associated with unlawful and wicked behavior, reflecting the ways of powerful men who do not care for morality. For the first time, Zarathustra preached that there was one God who was above all other ‘angels’ (izad, yazad), and who was inherently good.

Q: How do you interpret the dualism and conflict between light and darkness in Zoroastrianism?

A: In Zarathustra’s worldview God the Creator was too pure and too elevated to interfere directly in this impure world. Only the Angels could do this, by being in touch with humans. And helping them The Great Angle representing God’s Goodness was called the ‘Holy Spirit’ (Spenta Mainyu), and his opponent in this world was Angra Mainyu (Ahriman), the ‘Evil Spirit’. As time went by, it became difficult for ordinary people to understand the difference between God and his Holy Spirit, and eventually, Zoroastrians came to believe that the two were identical. As a result, they thought that Ahura Mazda was the direct opponent of Ahriman, which implied that they had a similar status. That led to the belief that – instead of one Absolute God in the Universe and two opposed ‘Spirits’ in this world – there were two equal divine forces; this inspired a dualist way of thinking. 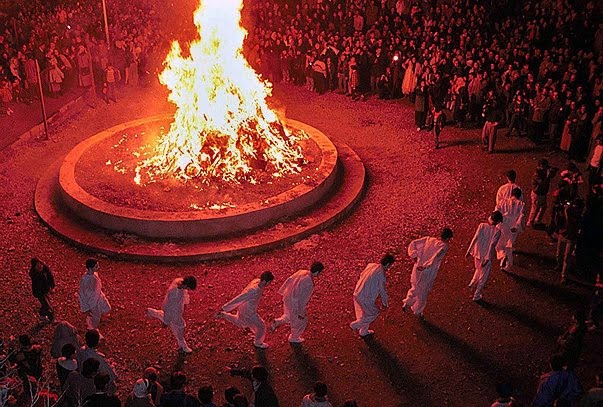 Q: How did Zoroastrian teachings influence “Abrahamic faiths” and other beliefs?

A: The insight that this world is not as God intended was such a fundamental step in human thinking that it seems to have been accepted by many of those who came into contact with it. From Achaemenid times onwards there were close contacts between Zoroastrianism and Judaism in Babylon and elsewhere. These contacts would have contributed to the spread of this ‘moralistic’ worldview. In any case, this idea must have been fully accepted in the environment that gave rise to Christianity, which cannot be understood without it.