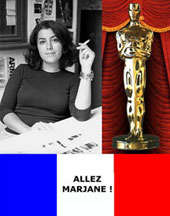 A handful of ordinary lives caught in the storms of civilization inspired Charles Dickens’ Tale of Two Cities, and Boris Pasternak’s Dr. Zhivago. Recently Marjane Satrapi’s Persepolis has rendered the Iranian revolution in intimate terms, approaching what Dickens accomplished for the French revolution and Pasternak achieved for the Russian revolution. While History is a satellite photo of a forest, this autobiographical narrative is a single leaf which you can rub between your fingers and bring to your nose.

The graphic novels, Persepolis and Persepolis 2, now combined into a movie, do not look back to the classics. Satrapi’s self mocking style is ultra-modern. It combines a Disneyesque cuteness with the author’s Hedayat-like anguish. At first the work appears to lack subtlety, protesting the Islamic Regime’s repressions too directly. Later we realize this straight shooting is just another manifestation of the no-nonsense way in which the artist conducts her life. Satrapi’s uninhibited tendency to speak her primal mind has been the driving force in the events of her life.

After she slugged her school principal in Iran and trashed the Islamic Regime in the classroom, Satrapi’s parents hurriedly dispatched their fourteen-year-old daughter to a Catholic school in Europe. There she got herself expelled by calling the nuns whores. Later she made herself homeless by telling her Austrian landlady to go fuck herself. The nuns had dared suggest Iranians had no manners, and the crypto-racist landlady had accused Satrapi of theft.

In the humorous movie, some of the laughter comes from the character’s obliviousness to authority, and some from her breaking personal taboos such as showing us her hairy legs. One of the best moments happens in a scene where she combines the two techniques. Her Jedi master of a grandmother passes on to her granddaughter the secret of having firm breasts in old age. I won’t reveal the trick here, enough to say Yoda himself would shrink from the mind control it demands.

The humor sweetens the profound bitterness of the events. As in Sound of Music and Cabaret, where sugary melodies simultaneously mask and highlight the creep of fascism in Europe, Satrapis’ self-deprecating jokes expose the modern dissonance between individual concerns and social forces. Ominously, Satrapi’s Europe is as purposeless as Iran was in its pre-revolutionary times.

European youth, drugged, disappointed and mistrustful of their leaders, shout their aimless rage out-screaming electric guitars. In a scene stunningly effective for its graphics and sound, a club musician swears incomprehensibly at air while giving the finger to the emptiness of existence. The scene is also quite funny, which is why–for me–it best captures the bi-polar psychology of Persepolis.

Meanwhile, back in Satrapi’s Iran the youth have become focused by the war. With their existential angst soothed by arbitrary ideas of righteousness, they have become brutal enforcers of correct Islamic behavior. Much as Charles Dickens warned and criticized English society by dangling the French revolution in front of English eyes, Persepolis drags our attention to the possibility that the upheaval in Iran is just one expression of the global rationality crisis: the rising suspicion that Western Enlightenment has lost its appeal.

In Persepolis we find warmth and satisfaction only in the love between family members. In a departure from Disney charm, even the pure love between a dog and its European master is lampooned as a sign of loneliness and alienation. Family love is something Iranians have had in abundance for as long as we have been mammals. What does modernity offer that is worth the price of giving up family for a mutt?

A frame of mind which extends our caring for immediate family to include all of society was an implicit promise of modern humanism, to replace the explicit promise of the religions we outgrew. In Satrapi’s Europe, socialism cures her pneumonic, cigarette damaged lungs, but it is also why this smart, educated youth spent days homeless in the cold seeking cigarette butts on the sidewalk.

Satrapi constantly reminds us that she comes from a family of progressive liberals. Her uncle, who wrote his thesis on Marxist-Leninism, a program to reverse alienation, was jailed and eventually executed for his efforts. Yet there’s a scene in which an innocent conversation between Satrapi’s parents brings a heartbreaking disappointment.

The well-to-do parents discuss moving away from Iran–to America perhaps. Satrapi’s father tells her mother, “Why, so I can become a taxi driver and you a maid?” After years of risking their lives preaching that everyone’s function in society merits dignity, these “somebodies” still can’t shake their traditional disdain for “nobodies.”

Purposefully or not, Satrapi’s work goes to the heart of why our liberals and leftists were so roundly trounced by the Islamists. The intellectuals saw themselves as an aristocracy by virtue of their Western education and professional expertise. Like a piece of breakfast stuck to the lips, their internalized colonialism was seen by everyone but the intellectuals themselves.

Tellingly, numerous times in the graphic novel and in the movie, God appears to the young Satrapi as the Christian father figure, a leap Westward from the eerily abstract Semitic entity, Allah, who according to the Koran is “lam yalad va lam yoolad”: begets not, nor is begotten. In the book, this child raised among Marx fans self-critically reminds us of how Karl Marx looks so much like God to her–except with curlier hair. The mostly Muslim Iranian nation could not have overlooked what was obvious even to a child.

Meanwhile the movie shows us that the Islamic Republic has put a window washer in charge of administering a hospital. An asinine expression of Islamic affirmative action, but a gesture nevertheless, not unlike the ugly punk musician, this time giving the finger to the old order.

Social insightfulness aside, Persepolis is above all a living account of a young woman who has courageously invited us into her personal life, to share how she was affected by a pivotal period in world history. Our hostess is a punk version of Anastasia, the last surviving princess from a sophisticated class, executed, exiled and suppressed into oblivion by the boorish crowds. She is strong, but also prone to bouts of depression and self doubt. Unlike the fictional Dr. Zhivago or Sydney Carton of The Tale of Two Cities, Marjane Satrapi is real and lives among us today. So her story is not over, and we continue to worry for this character as her sudden celebrity status brings new adventure to her life.

Precisely because Persepolis is world-class art, it has set off political bickering, and triggered ideological opportunism. This is nothing new. Boris Pasternak’s Nobel prize in literature was helped along by the CIA in order to embarrass the Soviets (Pasternak knew nothing of this). The Iranian government has already protested Persepolis’ winning of the Prize of the Jury at the Cannes film festival:

“This year the Cannes Film Festival, in an unconventional and unsuitable act, has chosen a movie about Iran that has presented an unrealistic face of the achievements and results of the glorious Islamic Revolution…”

Since the US quarrel with Iran intensified, many Iranian women activists, writers and artists have received significant attention in Western media, Shirin Ebadi, Azar Nafisi, Firoozeh Dumas, Nahid Rachlin, Shahrnush Parsipour, Shirin Neshat, Azadeh Moaveni… To varying degrees, these Iranian women condemn the abuse of their heartfelt protests to justify Western aggression against Iran. But among them, the foul mouthed Princess Satrapi may have the most eloquent advice for both sides of the propaganda war. As she once instructed her dog-loving landlady, Frau Doctor Heller, “Go fuck yourself!”