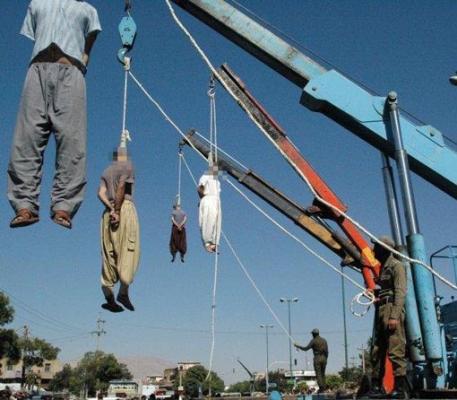 According to a recent report by Amnesty International, at least 346 people have been executed in 2008 in Iran.

At least two people were stoned to death in 2008 in Iran.

“The increase in number of the executions is in line with a general deterioration in the human rights situation in Iran” said Mahmood Amiry-Moghaddam the spokesperson of Iran human Rights” network. “At least 58 people have been executed since the beginning of 2009” added Amiry-Moghaddam.

Among the 282 people executed in 2008, there were 4 women and at least 9 minor offenders among those executed, 7 of which were announced by the official media (3 in Isfahan, 2 in Bushehr, 1 in Sanandaj and 1 in Shiraz). The 2 other minors whose executions were reported by unofficial sources were executed in Shiraz and Sanandaj. The youngest victim in 2008 was Mohammad Hassanzadeh. He was only 16 years and 11 months when he was hanged in the prison of Sanandaj convicted of a murder allegedly committed at the age of 14 years and 10 months.

“At the present moment, there are at least 150 minor offenders on the death row in the Iranian prisons” said Mahmood Amiry-Moghaddam.

He continues: “ Execution of minor offenders is a serious violation of international conventions that Iran has ratified. We ask the UN and world community to mobilize against the death penalty, especially death penalty for minors, in Iran. We need to make an alliance consisting of Western countries as well as countries in the Muslim world. EU has a particular responsibility in this matter. EU upgraded its economic and diplomatic relations with Iran at the end of 90’s on the condition of improvement in the human rights situation. Not only we have not seen any improvement, but the human rights situation in Iran is getting worse day by day. It is necessary that EU reconsiders its relations with Iran and signalizes to the Iranian authorities that it takes lack of improvement in the situation of human rights seriously”.

The current report is based on the news published by the news website Iran Human Rights between January 1 to December 31. 2008. Death penalty is the main focus of this report. All the news published by Iran Human Rights are based on the verified reports in official Iranian media. Only in rare cases we have referred to our own sources that have proven to be very reliable. Stoning sentence of three men in December 2008 was one of the cases where in absence of official reports, we had to publish the news solely based on our sources. The news was confirmed by the Iranian judiciary spokesman three weeks later.

It is important to emphasize that the present report gives by no means a complete figure of death penalty in Iran.

It is partly due to the fact that the present report has not included more than 70 cases of death penalty (some of which are official reports) that are in the process of being verified.

It is well known that the actual numbers of executions in Iran are much higher than the official numbers. A top ranking official in the Iranian intelligence service, commentingexecution of an alleged spy, said recently to the news agency Irna: “We normally do not execute the spies, and whenever we execute them, we normally do not broadcast news of the execution” (November 22, the official news agency Irna).

Below follows a short preliminary report on the death penalty in 2008 in Iran. A more complete report will follow later:

TOTAL NUMBER OF THE EXECUTIONS According to our preliminary analysis at least 282 people were executed during 2008. This number will probably reach about 350 since we are in the process of confirming more than 70 other cases. This number exceeds by far number of the executions in 2007 where 317 cases were reported (Amnesty International’s annual report on Iran)

SOME FACTS ON THE 282 CASES REPORTED HERE

There were 4 women among the 282 executions in this report. All of them were hanged in the Evin prison of Tehran.

At least 9 minor offenders were executed in 2008
Seven of the executions were reported by the Iranian media (3 in Isfahan, 2 in Bushehr, one in Sanandaj and one in Shiraz).
Mohammad Hassanzadeh was 16 years old when he was hanged in the prison of Sanandaj
In addition to these seven, executions of two other minor offenders (one in Shiraz and one in Sanandaj) have been reported by unofficial sources.

TIME OF THE EXECUTIONS

July was the month with the highest number of executions (71), followed by January (36), December (30), November (28) and August (27).
Lowest number of the reported executions were in the months of March (3; due to the Iranian new year) and September (1; this year coinciding with the holy month of Ramedan).
Most of the executions in Tehran took place on Wednesdays and in Isfahan on Tuesdays.

INFORMATION PROVIDED BY THE AUTHORITIES

Most of those executed were either identified only by their initials or not identified at all.
Age and time of committing the offence was not provided for many of those executed.
Most of those executed were convicted of murder, drug trafficking and rape. However the following charges were also used: economic corruption (1), espionage (2), Moharebeh (11; a term commonly used for those to are involved in armed struggle against the authorities; 6 of which were charged for belonging to the Jondollah group in Baluchestan, one charged for belonging to an Arab separatist group), Arazel o obash (14; term translated as trouble makers) and less specific charges such as disruption of order, consumption of alcohol, keeping arms, immoral relationships and “other crimes”.
The well known bloger and civil rights activist Yaqub Mehrnehad was executed convicted of supporting an armed Baluchi group.
Many of those executed were tried in closed “Revolutionary Courts”.

Most of the executions have taken place by hanging.
20 people were hanged in public places.
One person was first executed by firing squad followed by hanging in the prison of Isfahan.
In 2008, three men were stoned to death on December 26 in the cemetery of Mashad. One of them survived.

Any questions regarding the details should be addressed to the following address: Iranhr2007@gmail.com or spokesperson of the site Iran human Rights: Mahmood Amiry-Moghaddam (Tel: +47 91742177)