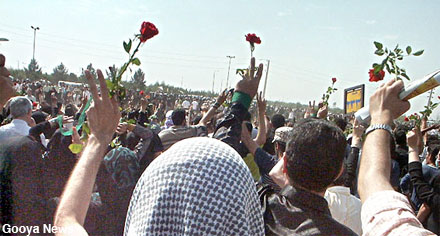 This is going to be a slightly disjointed email, I’m sorry in advanced. It’s already well passed midnight here and we just finished returning from the streets protesting. But I wanted to make sure to get this out tonight.

Today marked the 40th day anniversary of the killings of such youth as Neda Agha Soltan and Sohrab Aarabi in Iran’s post-election demonstrations. We headed to Behesht Zahra cemetery in the afternoon to join the 4pm ceremony at their grave sites. Behesht Zahra is about a one hour drive south of Tehran and as we neared the cemetery, about five police cars and officers were directing traffic. Waiting to enter the cemetery compound in the traffic, one of my companions pulled down the window and half jokingly asked the police officer what was going on. He smiled back and said, “nothing, just go towards row 257.”

For those not familiar with Behesht Zahra, it’s an enormous cemetery with wide avenues and squares. Knowing it would take us a while to find our destination, the police officer decided to help by telling us in which row we could find Neda’s grave (others in Behesht Zahra would help lost drivers by directing them to Neda. That’s all people said: “Neda ounjast” (Neda is there), pointing in the direction of her grave). Throughout the ceremony it was obvious the police force was very sympathetic with the people (as opposed to the anti-riot police and the revolutionary guard factions that were present in large numbers and were standing by the graves of both Neda and Sohrab).

By the time we arrived to their graves, it was 4.30pm and about 150,000-200,000 had gathered there. Most had on green ribbons and shouted in unison: “Neda-ye ma namordeh, ein dolat-e ke morde” (Our Neda is not dead, it is this government that is dead). Her grave was covered in flowers and candles, as was the grave of Sohrab, just a few feet away. The demonstration was held about 75 feet from the graves and was where the majority of the people had gathered. The main difference between this gathering and the other gatherings in the past two months was that the slogans for this gathering were very highly charged and at times extremely revengeful. People shouted: “ma bache-haye jangim, bejang ta bejangim” (we’re the children of war, fight and we’ll fight back); “mikosham ani ke baradaram ra kosht” (I will kill he who killed my brother). There was no more talk of reclaiming the vote, but of getting rid of this “coup” government; the most numerous chant was “Death to the dictator.” The anger could be felt at this gathering (which for me was a very ominous sign of worse things to come) and there was a very palpable lack of fear among people. Both Mir Hossein Moussavi and Karoubi had shown up at the gathering earlier in the afternoon.

We stayed for nearly two hours and decided to leave when we saw the security forces getting larger in number. As we left, we heard that they had hit some with batons and we could feel the tear gas in the air. A few minutes later reports emerged that Jafar Panahi, the award-winning filmmaker was arrested, as was Mahnaz Mohammadi, a documentary filmmaker and a women’s rights activist. They have both been taken to an unknown location.

As we left the cemetery, the honking of the cars began: most cars were heading into Tehran to try to get as close to Mosallah as possible (the large mosque in central Tehran where Mousavi and Karoubi had asked to hold a ceremony of those killed last month—the interior ministry did not give the permission for the gathering, but people had decided to show up there at 6 regardless). Every car driving out of Behesht Zahar was honking their horns and all drivers and passengers had their hands out of their cars in the peace sign. The police tried to discourage drivers from driving the main highway that would lead to central Tehran, but very few listened. Soldiers standing along the streets flashed the peace sign back at the honking cars with large smiles on their faces. It was obvious the soldiers and police forces were with the people.

As we reached my grandmother’s house, which is just a few streets away from Mosallah, we saw people running from motorcycles (the Basij), who tried to taser them, and the protesters encouraged us to turn our windows up so the tear gas wouldn’t hurt us. Residents came out of their homes and began small fires on the corners (to help against the tear gas). The streets were completely overtaken by protesters who were in a cat and mouse game with the security forces, all on motorcycles. We parked the car and went onto Valiasr Street (the main boulevard in Tehran that runs from north to south). The city was covered in a haze from all the tear gas and fires started on the corners. All roads leading to Mosallah were witness to huge confrontations between people and the security forces.

As we arrived on Valiasr people were spilt on different sides of the sidewalk: one side would shout slogans, the anti-riot police would attack with their batons and paint-ball guns (to mark the protesters to pick them up later), then the other side of the side-walk would start the chanting, so the anti-riot police would be forced to come to this side. As they attacked one side of the sidewalk, the protesters on the opposite side would come out of the side streets they had just run into and gather, regroup, and chant again. This continued for hours. When the anti-riot police disappeared for a bit, people lit candles and put them on the sidewalks, to commemorate the deaths of Neda, Sohrab, and the others. At one point we had managed to cover one section of the street in candles. As soon as the plainclothes militia saw the sidewalk lit in candles, they approached, stomped them out, and began hitting people. No one turned away. They would attack us, we’d run into the side streets and reemerge less than one minute later. The most haunting scene was when protestors had gathered at the beginning of Takht-tavvos Street and were shouting “Death to the Dictator.” The anti-riot police gathered on their motorcycles (two per motorcycle, all in camoflouge uniform, with full riot gear) in the middle of the street and their leader began pumping them up (it looked like a huddle during a football game—it was disgusting). He got them riled up, spun his baton in the air three times, and then they attacked (there were about 30 motorcycles, all in full gear). As they attacked the protesters in the street, some from the side began throwing stones at them, and all began cursing.

The anti-riot police would also drive up in cars and try to get people to move along and not congregate. People would walk slowly, then turn right back around. There was no more fear. They attacked, people retreated in the side-streets, then would come back out in less than one minute as soon as the motorcycles had gone off. There were so many protesters, and they were spread out all throughout Tehran (Valiasr Square, Fatemi Square, Yousefabad, Vanak Square, Mosallah, Sanati Square, Amirabad, Revolution Square, Tajrish Square….all the main streets and squares of Tehran were full of people and it seemed for the first time that the forces simply were not enough).

The security forces were using batons, chains, whips, tasers, paint-ball guns, and I saw handguns in the hands of three of them. There was a rumor that a few were shot at in Vanak Square. Two people were picked up near us and people tried to chase after the security forces to get the young men back, but it was a futile chase. Until around 11pm the streets were full of people. At 10pm the shouts of Allah-o Akbar and Death to the Dictator were being screamed from the rooftops all over the city until 10.30pm.

Friends in Isfahan also reported that 4-5,000 people had gathered there and there were no security forces at all present This was the first such gathering on a large scale in Isfahan since the first week after the election. Reports also came of gatherings in the thousands in cities of Rasht, Shiraz, Mashad.

People of all ages, sexes, and socio-economic groups were out today. We ran into many at the cemetery who had driven in from the provinces to attend the 40th day ceremony. Religious men and women were numerous at the gravesite, as were non-religious men and women. Children were out (at one point on the street back in Tehran I saw a group of two brothers and one sister, the youngest about 7 and the eldest 14, walking hand in hand down the street). Middle aged and older people would turn to us and say “we’re out on the streets for you guys, this is for your future, for your generation.” One mother told a soldier who asked her to go back home “I’m not going anywhere. Don’t you know that we brought you guys into power by doing just this: by being out on the streets for nights on end. We brought you to where you are today, and we’re going to take you out by being on the streets. I’m not going anywhere.”