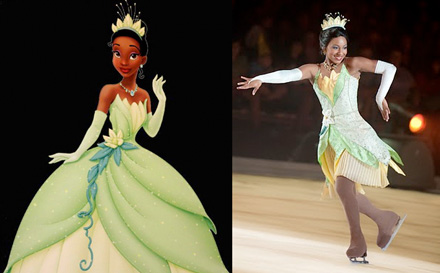 In 2009, Tiana joined the cast of the Walt Disney Company princesses, a franchise that has generated over $3 billion in global retail sales since 1999 alone (mind you, Snow White and the Seven Dwarfs premiered in 1937). Not only is The Princess and the Frog the first film to be traditionally (2D) animated in a cool minute, it is also the studios’ first film to feature a “black princess.”

Even before the films debut, Disney on Ice produced “Let’s Celebrate,” a show that includes Princess Tiana and Prince Naveen in the Disney family. Below is an interview with principal skater Tetona Jackson, who just completed tour with the production. The 21-year-old ice celebrity shares the politics of her experiences starring as Princess Tiana as well as in the figure skating world. Whether a true milestone in the national imaginary or another racialized cartoon, Princess Tiana is nevertheless, according to Tetona who herself is half Black and half Iranian, a steppingstone towards a more diverse horizon.

The Walt Disney Company introduced its first non-white animated princess, Jasmine, in 1992’s Aladdin. With the addition of Pocahontas (1995) and Mulan (1998), three out of eight princesses in total are of color, yet none of them are Black. In your opinion, what took so long for Disney to introduce a Black princess?

To be honest with you I have no idea what took so long to finally present a Black princess but um, I mean, there’s always a right time for everything and I think they were waiting for the right time to release it. I know they were working on the movie for at least four years prior to the movie coming out so it had been in the works and talked about for quite some time.

Before the frog princess became Tiana, the film was supposed to feature Maddy, a black chambermaid to a white Southern debutante. But after receiving accusations of racial stereotyping, Disney changed the script. Still, there are folks who believe Tiana isn’t much better. With or without this controversy in mind, what is Princess Tiana’s significance?

This past year that I was doing a lot of tours there was a lot of controversy. One, about the fact that Naveen wasn’t Black. That was a huge controversy and issue, and it was brought up a lot when I was doing interviews. Another controversy was that she is the first African American princess but she is a frog seventy-five percent of the movie. So a lot of people were annoyed that they couldn’t even make her be human for the whole story.

Tiana is based on a true person and she lives in New Orleans, and I got to meet her. She has a restaurant there. A lot of Tiana’s character is based off of her. She struggled, she wanted to have her own restaurant, she got it, and now it’s a huge restaurant in New Orleans. I love the fact that she’s a strong woman and so independent, which separates her from so many of the other Disney characters and princesses. She knows what she wants in life and she makes it a point to achieve those goals no matter what she has to go through, and I think it’s an important message to give to kids. That’s the one thing I really love about the movie and the message that it also gave me.

Do you yourself identify with her? If so, how?

Well as far as looks go, I’ve been told by a lot of people that I do look like her. But personality wise, I think we do have somewhat of the same personality. I think growing up with a single mother made me learn how to be an independent person and it made me that much stronger. And you know there were a lot of things I had to deal with as a figure skater because it’s not a black persons world. There’re few Black people in figure skating, and growing up with so much of the politics that went on behind the scenes, I always felt like I had to work that much harder to show that I could be a part of that world. And I pushed a lot to get to where I am today and I’m blessed to portray such an important character and to be a part of Disney on ice.

You yourself are half Black and half Iranian. Does this affect your identification with her at all?

Do you think it’s time for a mixed race princess?

I think it’s time for a lot of princesses! There’re so many grounds that Disney hasn’t covered yet, and I think they can push that much further and make so many things happen.

What about a Black prince? You alluded to this earlier. Prince Naveen is neither Black nor white, but an ambiguous “tan.” Maldonia, where he reigns, is an invented country. The actor who plays him, Bruno Campos, is from Brazil.

When I was talked to about playing Princess Tiana I was told that, because I was asking you know, questions to prepare myself for whatever I was getting myself into and they didn’t really know how to describe Prince Naveen to me…they laughed and were like you know, he’s tan he might be Brazilian but we’re not sure what he is! As far as Naveen goes, it would’ve been cool to have a black prince, um, and I think it’s necessary to have a black prince at some point.

It’s really cool that Tiana and Naveen are an interracial couple because I think that’s another thing in this society that needs to be talked about and brought up and out in the open. As an African American girl or as a mixed girl I’m frowned upon when I’m seen with a White or Latino guy. And you know, I don’t think you need to date within your race or religion to be a good person. It doesn’t matter the color of your skin, and I think when you’re in love or happy then that’s all that matter. I can see the disappointment with him not being Black and hopefully there will be a Black prince someday. But you know, we need time I guess. It took how long for a black princess to come out. Like I said before, I think Disney has more to offer and I’m hoping that they’ll widen their views.

In other interviews you are frequently asked about Princess Tiana’s racial import, but what about her socio-economic import? What do you think about princesshood and Disney’s typical ‘rags to riches’ plot?

As far as her going from rags to riches, I like that idea because it’s more…its real, it’s life. How many people can truly identify with Cinderella and Sleeping Beauty, or Snow White? They’re amazing movies, but Tiana’s real; that is how life is. Being in New Orleans and being able to see all that was going on there, I think it was good to see someone going from rags to riches. I think it’s important to see that and to know that that’s possible. But like I said, I like the idea of her growing up in the ghetto.