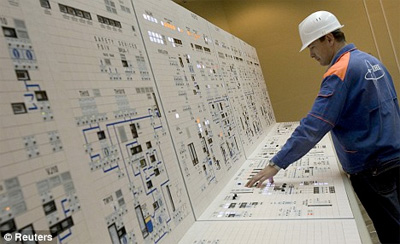 At a ceremony this Saturday near the southern Iranian coastal city of Bushehr, Russia will begin the process of loading fuel rods into Iran’s first civilian nuclear reactor. Theoretically distinct from the rest of the regime’s disturbing nuclear program, the Bushehr plant nevertheless remains a major international concern. The low-enriched uranium in the fuel rods would, if diverted, substantially increase Iran’s existing stock of the material, which many suspect is already being used to develop nuclear weapons. Even if they were used solely for electricity generation, the rods would eventually produce plutonium-rich residue that could also be reprocessed for use in a weapon. For Iran, the Bushehr event will be a gesture of defiance against U.S.-led international pressure; for Russia, a sign of Moscow’s different diplomatic approach to the prospect of a nuclear-armed Iran; and for the United States, an exception to the tightening sanctions regime, which officials claim is forcing Tehran to reconsider the wisdom of its policies.

Background
Plans for the Bushehr reactor predate the 1979 Islamic Revolution. In 1975, the German company Kraftwerk Union, part of Siemens, won a $6 billion contract for two 1,000-megawatt reactors. Following the shah’s ouster, with the two plants only 50 and 85 percent complete, Kraftwerk withdrew from the deal, and the facilities were partially destroyed by bombing during the 1980-1988 Iran-Iraq War. In 1995, however, Russian firm AtomStroyExport signed a contract for a single 915-megawatt plant on the site.

Since then, the project’s pace has seemingly been linked with Moscow’s sensitivity to U.S. and other diplomatic pressure. Fuel rod deliveries began in December 2007, before construction was completed in March 2009, and the plant was originally slated to come online in August 2009, reaching full generation capacity by March of this year. Once it is fully operational, the new plant is intended to make a significant contribution to Iran’s electricity production. Currently, the total generating capacity of the country’s power plants is reportedly 49,000 megawatts, but some plants operate at only 10 percent of their theoretical load.

Start-Up Process
On August 21, the low-enriched uranium reactor fuel, already encased in metal rods, will be shifted out of storage. The 160 fuel assemblies, each weighing 1,540 pounds, must then be loaded into the reactor. The processes will take several weeks. The final stage is to bring the fuel rods closer together, forming a critical mass and creating the controlled chain reaction needed for power generation.

Theoretically, the process is modeled on best practices in use worldwide. Russia is supplying the low-enriched uranium fuel, and the International Atomic Energy Agency will inspect the reactor regularly. Once the fuel rods are used up, they will be removed, immersed in water for several years to diminish their radiological hazard, and then returned to Russia in special railcars for reprocessing.

Nevertheless, safety concerns persist. One fear is of a nuclear accident similar to the 1986 Chernobyl disaster, which led to widespread contamination. Prevailing winds and sea currents in the northern Persian Gulf would mean that any radioactive leakage from Bushehr would quickly reach southern Iraq, Kuwait, and parts of Saudi Arabia. Potential earthquake damage is a concern as well; Iran has several major fault lines covering 90 percent of the country. And a reminder of the possibility of an aircraft crashing into the reactor building came just this week, when the crew of an Iranian fighter aircraft ejected a few miles away.

Proliferation Concerns
The greatest concern about Bushehr is that it could contribute to Iran’s suspected nuclear weapons program, currently centered at the expanding Natanz uranium enrichment plant 300 miles to the north. Tehran argues that its enrichment facilities are intended to fuel yet-to-be-built domestic power reactors, a claim widely deemed implausible. The prospect that Iran would divert material for enrichment is often ridiculed as being contradictory to its claims of purely peaceful nuclear ambitions, and the technical challenges involved in the process tend to bolster this view. But writing in the Financial Times on Monday, U.S. Treasury undersecretary Stuart Levey — the Obama administration’s point man on Iran sanctions — noted that the regime’s nuclear and missile programs involved “evasion” and “an array of deceptive practices.”

A more immediate danger is that the Bushehr plant will provide cover for the training of Iranian nuclear scientists and technicians destined to work at Natanz or the Arak heavy-water research reactor (the latter a potential source of plutonium). The unfortunate overlap in skills needed for civilian and military nuclear programs, and consequent proliferation risk, is well known to the U.S. government: the Departments of Energy and Commerce require special approval of foreign nationals seeking employment in the nuclear energy divisions of companies such as General Electric.

Challenge to U.S. Diplomacy
Although Washington once found the Bushehr project problematic, in recent years it has depicted the reactor as the type of peaceful nuclear-power project it has encouraged in other regional countries. In 2009, for example, Washington signed a so-called “123 agreement” with the United Arab Emirates allowing for further nuclear cooperation (a term derived from a paragraph with that number in the 1954 Atomic Energy Act). This week, the State Department said, “Bushehr does not represent a proliferation risk [but] underscores that Iran does not need its own indigenous enrichment capability [at Natanz].”

According to the Wall Street Journal, Washington acquiesced to this weekend’s start-up as part of the diplomatic price for Moscow’s acceptance of new UN sanctions on Iran, approved last month. U.S.-Russian diplomacy on the nuclear issue has been further complicated by Moscow’s planned provision of S-300 surface-to-air missiles to Iran, a deal agreed but not yet enacted. Those missiles could greatly hamper any potential airstrikes against nuclear targets such as Natanz, Arak, or the Isfahan uranium conversion facility; consequently, their delivery could prompt an early Israeli airstrike before they became operational.

Once the Bushehr reactor becomes operational, the worst-case scenario is that Iran declares its military nuclear intentions and bars inspectors and Russian officials from the new plant. The fuel assemblies contain several tons of uranium enriched to 3.5 percent of the fissile (i.e., potentially explosive) U-235 isotope. If diverted and converted into feedstock for the Natanz enrichment plant, that material would considerably enhance the site’s ability to produce the 90 percent enriched uranium needed for an atomic bomb. (So far, Natanz has produced just 5,300 pounds of low-enriched uranium, some as high as nearly 20 percent enriched.)

Alternatively, if used in the Bushehr reactor, the fuel rods would produce plutonium residue, and if reprocessed, that material could eventually be sufficient for the production of at least one nuclear bomb per year. And military action against any reactor containing plutonium would lead to widespread deadly contamination. (In contrast, Israel’s 1981 strike against Iraq’s nuclear reactor and 2007 destruction of Syria’s planned reactor both took place before fuel had been inserted.)

In light of these risks, the United States should lead international pressure on Iran to ratify an IAEA protocol allowing unhampered access for inspectors. In the meantime, Washington should prepare itself for Iranian celebrations starting this weekend during the annual “Government Week,” which showcases national achievements. New weapons systems will be displayed, and missile tests will be conducted. Yesterday, Defense Minister Ahmad Vahidi highlighted such weapons as evidence that “sanctions have had no impact on us but [have] made us more experienced and self-sufficient.” Tehran also recently announced that it will begin work on a third enrichment plant next year. The need for Iran to fully disclose its nuclear intentions remains urgent.

AUTHORS
Simon Henderson is the Baker fellow and director of the Gulf and Energy Policy Program at The Washington Institute. Maj. Stefanie Peterson, a U.S. Air Force intelligence officer, is a visiting defense fellow at the Institute.