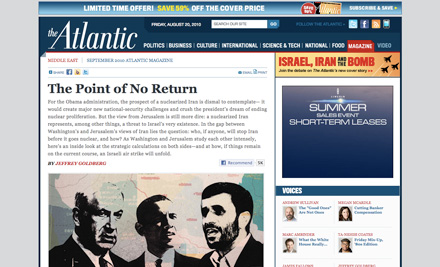 Is there a happier journalist last week than The Atlantic‘s Jeffrey Goldberg? So much ink has been spilled discussing, critiquing, and debating Jeffrey Goldberg’s Iran piece, a calculation of the very high probability of an Israeli military strike against Iran in the coming year, you’d think Goldberg was determining Iran policy himself. And dumping gasoline on this echo-chamber campfire, neocon John Bolton has declared that Israel has days left before the point of no return. All this is set against a backdrop of right-wing hysteria over the mosque in lower Manhattan and the supposed failure of liberals to understand the true nature of the threat of Islamofascism. Who could guess the number of hits Goldberg’s piece has received with all this going on?

Unfortunately, however, Goldberg’s article is bad journalism and so is most of the commentary and debate surrounding it. Here’s why.

First: Goldberg is a master of the art of speculation but speculation is not journalism; speculation is sport. Many have critiqued Goldberg for the accuracy of his calculations, arguing that an Israeli or American strike is far from likely (see for example Robin Wright, Martin Indyk, Fred Kaplan, and many others). But all of these critics debate Goldberg on his own terms–that is, they debate the issue of probability and engage in a better or worse-informed game of risk. All engage in the art of assertion and guesswork, but they fail at instruction and analysis. The debate has not taught us anything. The reader is left with no better understanding of the nature of the Iranian threat or whether the military strike being discussed is even justified or potentially effective.

Second: A number of critics have dismissed the Goldberg piece as propaganda. These critics fall into two camps. The first are those who discredit Goldberg as a propagandist because of (1) his reputation for drumbeating during the build up to the war in Iraq or because of (2) his well-known pro-Israel position.

A second camp of more serious critics like Glenn Greenwald has picked apart the assumptions and framing of Goldberg’s article to demonstrate its function as (as they see it) a piece of hawkish propaganda.

But Goldberg’s agenda is not as easy to determine as many of these critics would have it. Yes, one could read Goldberg as habituating his reader to the idea of the inevitability of an Iranian strike. Netanyahu, Goldberg argues, is so burdened by the legacy of the Holocaust and the “lessons” of Jewish history (embodied literally in the presence of his historian father), that he will certainly strike Iran if America does not.

But Goldberg’s piece could easily be read as dovish or at least anti-hawkish (that’s right, you heard me). By framing the Israeli position as so extreme that a strike seems inevitable, Goldberg’s piece functions as a deterrent to Iran, and ultimately makes an attack on Iran unnecessary. This is similar, by the way, to what the Iranians themselves are doing: presenting themselves as so nuts (whether they really believe what they say or not), that the rest of us believe they might actually use a bomb if they had one. We might call this tactic “psyching the opponent out.” Goldberg describes the Obama strategy in similar terms. Could his article be read as propaganda for the Obama strategy? And, what more, those who argue contra-Goldberg, that a strike is unlikely (for whatever the reason), are possibly making a strike that much more likely to take place (that is, because they are mitigating the deterrent of “inevitability”). The anti-hawks could be beating a war drum with their very own white flags of surrender (For further flaws in the Goldberg-as-propagandist argument, see Robert Wright today in The NY Times).

This brings us back to the problem of speculation more broadly: not only is speculating over the possibility of a strike a total waste of our time, but it is also dangerous. The entire debate over probability should be dispensed with.

What we need instead is commentary and instruction on how to make sense of the Iranian regime: Is Iran a rational actor or an ideologically driven devil that really believes what it says? What should take precedence: Iran’s rhetoric or its actions? Is Iranian behavior consistent with its rhetoric or not? How can we determine Iranian intention: from its talk or from its action? Are the historical analogies drawn between the Iranian regime and Nazism accurate? Is Israel blinded by the legacy of the Holocaust or is this too all rhetoric? Are Iranian defenders blinded by Holocaust fatigue and anti-Zionism?

Few serious writers have used the attention surrounding Goldberg’s piece as an opportunity to get to the heart of these matters (Steve Clemons and David Rothkopf for example) . But much of this work does not teach us a strategy or a method for wading through the Iran debate.

Commentators tend to talk past each other, either privileging Iranian behavior over rhetoric, or rhetoric over behavior, or some combination of the two, without teaching the reader a strategy about how to evaluate the evidence. Most fall easily into a hawk or pacifist camp without addressing the opposing arguments or evidence.

These are not simple questions, to be sure, and many experts devote their careers to answering them. But journalists should be summarizing and engaging these academic debates. They should be distilling the information for us and offering us methods to make sense of them. Goldberg and most of his interlocutors answer none of them; they mention these issues in passing at best. In this sense, we are back to the same kind of banal journalism during the run-up to the war in Iraq.

A call to Goldberg and his interlocutors: stop speculating and do your job.