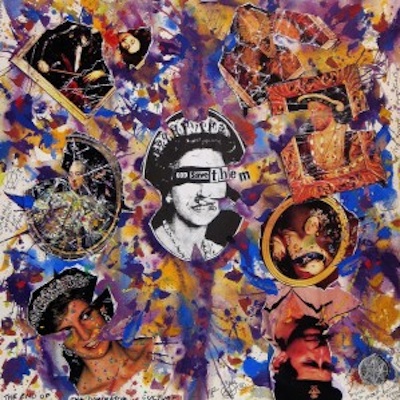 Curated by John Phillips, a prominent British artist whose works have been exhibited at such institutions as the Victoria & Albert Museum, and Liz O’Sullivan, an art consultant, who among other establishments has lectured at the Sotheby’s Institute of Art, London Calling: Tehran was conceived at their artist-run, nonprofit organisation/gallery, londonprintstudio. It marked the first in a series of collaborations which seek to further acquaint British audiences with contemporary Iranian art, and vice versa.

I, along with REORIENT’s Tehran correspondent, Fatemeh Kavandi, recently had the chance to speak with Yashar, Tarlan, Liz, and John about the exhibition and its significance in promoting cross-cultural dialogue, as well as the relationship between Iranian and Western artists in general.

What was the motivation behind organizing London Calling: Tehran? How did you come to be in touch with londonprintstudio?

Liz – It never ceases to amaze me how londonprintstudio is like a magnet for the most extraordinary people. They just appear. I would say that John Phillips is the real magnet, actually. I adore contemporary Iranian art, and when John telephoned me to talk about this interesting artist, Yashar, I joined them for lunch. Our lunchtime conversations about art, commerce, visionaries, censorship, and representation were fascinating and enlightening, and I knew immediately that I wanted to work with Yashar. That could have been working on anything — making sandwiches, fixing a car – anything. Developing this show with John, Yashar and Tarlan has been amazing. Incredibly open people. What a privilege.

Yashar – londonprintstudio is really magical, and I could never imagine how I would be connected to this space. For many years as a printmaker I was looking for important institutes around the world to make connections with and learn from, and although I knew of londonprintstudio for a long time, they didn’t know me. Now, we both know each other and I can say that all of this is because of John, an amazing man and a true friend. Through John I met Liz, and extraordinary woman who after talking to for five minutes, I knew I had to work with and learn many things from.

As mentioned on the statement of the exhibition, this project formed in London, with Liz and John, while we were speaking about everything in the world. A key part of the conversation centred on the intrigue and excellence of British and Iranian artists and the recurring focus and regret of how the media – independent and non-independent — always seem to report two one-sided views of how artists approach and develop their work in response to their cultures and lives.

Accordingly, the Calling Project takes a group of artists from each nation, discrete from any orientations, and asks them to talk about their capital city as a representation of dominant cultures, politics and other social aspects.

Tarlan – The best answer is to make connections against all the borders and limitations, of course. In my opinion this small-scale project is a very big step for both parties in learning more about themselves. In our experience in collecting works from Tehran, we have noticed that it is not just about showing some works to the British artists and audiences, but also a self-exploration to determine what are we going to present to show a real ‘us’ – not just the beauties and what we are proud of. It’s a review, and the time to talk about ourselves.

What types of works were shown at the exhibition? On what basis did the curators select the works to be exhibited?

John – In London we attempted to draw together a kind of collage/assemblage reflecting different aspects of the city’s life and the range of cultures gathered here.

Liz – The selection process was really interesting. You want to build a show with images of contemporary London and views on London and identity – and it is very easy to find lots of images with iconic city structures (Buckingham Palace, the London Eye, etc.) or tell-tale London features (e.g. black cabs & double-decker buses) – but the works we have chosen for this show have a very real London essence about them without the ‘usual suspects’.

Tarlan – For this show, there were two curators: John Phillips and Liz O’Sullivan. We in Tehran were the hosts of the show. I personally think that the selection was amazing, and I was really excited about the lineup of so many amazing artists – it was an amazing show.

Yashar – All the pieces in the exhibition were digital works, including photographs, digital prints, drawings, and a wide variety of two-dimensional artworks as digital printed editions. Like John said, the exhibition is a kind of collage/assemblage reflecting different aspects of London city life, and the range of cultures there.

You stated that part of your mandate was to foster exchanges between British and Iranian artists. In what ways did the exhibition facilitate this? Were the British artists presents?

John – We hope that this is the beginning of an ongoing dialogue between artists and audiences in the UK and Iran. Certainly the artists here in London have been very enthusiastic about taking part in the project. By sharing this dialogue on the Internet, hopefully, we open a different route to common understanding.

Yashar – This exchange is a symbolic act of creating dialogue between Iranian and British artists, and the two collections of artworks (for London Calling and later, Tehran Calling) will be exchanged between the curators of the exhibitions. We hope for the project to serve a platform for continuous artistic/intellectual dialogue in the future.

Tarlan – Unfortunately, it wasn’t possible for the artists themselves to be present at the shows, although if they could have made it, it would have been better. It’s not that important, though; the artworks spoke for themselves and made the ‘connections’, and this is the beauty of the project.

As a city, how would you say Tehran compares to London? In what ways are they similar?

Tarlan – Tehran and London are of course very big cities with many inhabitants having different cultures and lifestyles. I have been to London only as a tourist, but I can compare the lives of people in these two cities in great detail. There are too many differences between my city, Tehran, and other metropolises – we have too many limitations …

Yashar – Well, they can be compared in the sense that they are both metropolises, featuring characteristics similar to any other metropolis. They are both important cities politically, financially, and culturally speaking – one in the East, and one in the West. These two cities have had many interactions in the past, especially in the last century, shifting from being friends to enemies

In the age of the Orientalists, Persia was a vast source of inspiration and fantasy for Western artists and writers. Do you still believe that artists in the West continue to draw inspiration from Iran, and/or Iranian art?

John – London, perhaps more acutely than other Western cities is a ‘Tower of Babel’. London’s children speak over three hundred languages. This situation, which is marked by both proximity and isolation, creates an unconscious condition of hybridity and assimilation. In this sense London is, in many respects, no longer ‘Western’ except in the strictly geographical sense. It is trans global. Compared to other populations the Iranian community is relatively small, but it still represents around 30,000 Londoners. Thus, a dialogue with Tehran is a dialogue with ourselves, our neighbours, and our neighbours’ neighbours.

Liz – There was a wonderful show at the British Museum in 2009 entitled Shah ‘Abbas: The Remaking of Iran. It was such a powerful and beautiful exhibition. The importance of colour, the incorporation of calligraphy in the illuminated texts and paintings, the value of identity and capturing the beauty and essence of a culture — I have no doubt that Iranian art, in particular, inspires and influences artists worldwide.

Politically speaking, British-Iranian relations are at an all-time low. What can be said of the artistic relations between the two nations?

John – In many respects, cultural relations are affected by politics. In the UK there is very little exposure to contemporary Iranian visual art, because there would be little diplomatic capacity or will to facilitate exhibitions, etc. So, in this small way, we are doing it by ourselves.

Liz – It is very easy to see London and New York as the centres for contemporary art. Iranian art is simply extraordinary. Elements of identity and expression from Iranian artists are so vivid and powerful. The constraints and guidelines which are laid down by the state are always a consideration, and some of the most interesting work has come from Iranian artists’ interpretations of those guidelines. I suppose in an art market context, Iranian art is obviously booming and highly desirable. In an artist-led context, Iranian art is extremely important and intelligent. There is a rich stimulus base which underpins Iranian art. It touches you whether you have the full history or not. I cannot wait to see Tehran Calling: London.

Yashar – In Iran, diplomatic issues, especially those with the West limit us in making direct connections with the new and contemporary artistic movements there. Official shows and exhibitions of Western art usually focus on modern art, which was imported and introduced to the Iranian arts scene before the 1979 Revolution. We have a very rich collection of modern Western art, which is really unique in Asia and the Middle East, from Impressionist works to those produced just before 1979. In fact, some say that Iran is home to the world’s most valuablecollection of Western modern art outside Europe and the United States!

Inside Tehran’s Museum of Contemporary Art

Afterwards, before the age of informatics and the Internet in Iran, everything was limited to just the very few examples of photos, books, and exhibition catalogues from Western exhibitions, which were illegally imported by artists themselves. Now, I can say that with the help of the Internet and this kind of cyber-connection, instead of direct and face-to-face connections, we are walking side by side with artists around the world, and I am so proud of this. Like John said, cultural relations are affected by politics, and especially in the West, people just see a few example of Iranian contemporary art, while we know everything about Western art. We want to act independently of official decisions, and we need to keep pace with the rest of the world. However, we don’t want this to be a one-sided connection – we also want them to see what is going on in Iran, and this project will help achieve this, only if just a bit.

As well, I have to say that it was a great opportunity for us to see and have a collection of British works in Tehran. The works were an amazing collection from some of the best British artists we knew, and whom we were following on the internet. We really appreciate their faith in the project, and for us, I think the best response to their significant and important role in commencing this dialogue is to show our respect in our next exhibition, Tehran Calling: London.

Can we expect to see more Iranian-British collaborations on your side in the near future?

Tarlan – Why Not? Hopefully. YES!

Yashar – I want to appropriate John’s answer: What’s British English for ‘you bet’?