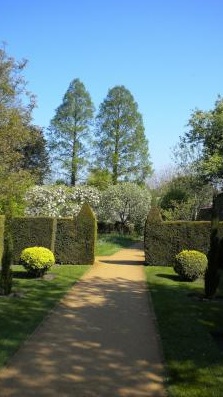 Tucked away from the hustle and bustle of an English high street is a small garden that has provided a peaceful haven for many the over the years. Petersfield Physic Garden in Hampshire was established by John Charles Edward Bowen, who lived in the town. [photo essay]

John first bought the land for his family’s “Secret Garden in 1956. But later, as it grew increasingly threatened with development, John decided to donate the land to the town through a trust, so that the garden would be there for future generations to enjoy.

Whilst it is linked with Hampshire, the garden’s true roots may be closer to John Bowen’s birthplace. He was born in Mumbai in 1909 and was just one of many in his family to go on to serve in the army. However, it was whilst he was working in the Indian Political Service in Bushir and in Zahedan that he became interested in Persian poetry.

Whilst he was studying Persian, John decided to translate several Persian poems into English and as the pile of translations grew, he wrote: “…I might be able to render into English a sufficient number of famous couplets to make an anthology representative of some of the most beautiful and famous lines in Persian poetry…to afford pleasure not only to English readers, but also to Iranians reading the originals.”

John, his friend Mr. Vejdani and other colleagues set about compiling their favourite poems for the anthology. John said he wanted to make sure he was able to communicate “the spirit” of the original poems in his translations.

John’s first poetry translations were published in an English language newspaper in Tehran. He wanted to make sure the poets were properly credited, so he asked that the Persian originals were reproduced faithfully alongside his own versions, only to find later that the newspaper had let him down. He was furious and wrote: “To my disgust the verse appeared at the tail-end of the back page….with Sa’di’s name not even mentioned.”

I don’t think it is just a coincidence that the garden has had its gates open to visitors since Nowruz 1988. It is fitting that John’s translation of a poem by Amir Khosrow is engraved upon the sundial in the garden to commemorate its bequeathment. But, as John seemed to have such a deep love of Persian poetry, I often wonder what he would have made of the lack of the Persian original on the sundial?

John died before the garden was completed, so the sundial became a memorial to him. Sadly, the absence of the Persian original on the sundial may be purely practical. According to the garden’s staff, when the sundial was designed, a restriction on the number of letters allowed on the bronze dial meant there was not enough space to engrave the Persian script upon it too.

In his book Poems from the Persian, John said: “I discovered the Persian of this poem carved on a marble slab at the entrance to the Cypress avenue in the garden of the Deputy Commissioner’s house at Mardan (in Pakistan).” Meanwhile, two Dawn Cypresses were also planted outside the back wall of the Physic Garden.

John was keen to express the garden’s connection to the East and its open spirit. However, he was reluctant to enter the limelight himself. In a letter to the BBC World Service, he talked about the theme for the garden, which he said was centred around the Arabic saying that three things should be in secret: A garden, love and a man’s soul…” So, perhaps we will never know the full story.