Sign up for our daily newsletter to get the top news and analysis delivered to your inbox.
Browsing Category

Can Iran get a second chance at extraordinary long-extinct Caspian tiger?

by Faranak BakhtiariJuly 30, 2020
The outstanding Caspian tigers once roamed over most of northern provinces of Iran, have gone extinct half a century ago, but recent studies show that...

Iran-China Deal Must be Green

by Daryan RezazadJuly 22, 2020
When ultra-conservative members of Iran’s parliament and the usual neo-con suspects within the United States power structure agree on an issue you can be certain geopolitical watchers...

by Faranak BakhtiariJuly 7, 2020
Mount Damavand, the highest peak in Iran, is located northeastern Tehran, but today, it is facing many environmental problems and challenges. Environmental enthusiasts believe that...

by Tehran TimesJune 10, 2020
Iran has recently unearthed a rare Bronze Age culture, related settlements and relics following to rounds of excavation in a plain near the north-central city...

by The IranianApril 20, 2020
The Persian leopard, also known as the Caucasian leopard is a leopard population in the Caucasus, Iran, Afghanistan and Central Asia.

God, gas and heroin. Now, the fight’s over water

by LA timesFebruary 6, 2020
Men across this windblown, lawless desert have fought over opium, God and gasoline, but now, Said Mohammed, a wheat farmer with a shovel and a rifle, senses a war brewing...

Sign up for our daily newsletter to get the top news stories delivered to your inbox.
Environment,

Why Is Iran So Paranoid About Environmentalism?

by Kaveh MadaniNovember 15, 2019
The power games of radicals for selfish ends are jeopardizing the sincere efforts of Iran’s environmental community.

by Tehran TimesSeptember 26, 2019
The level of water at Lake Urmia increased by 1.04 centimeters on Tuesday compared to the same day last year, according to the studies conducted...

by Tehran TimesSeptember 3, 2019
Although Iran is the only country which can save the precious species from disappearance, conservation projects fall into a single solution of captive-breeding. Cheetah's captive-breeding...

by Tehran TimesAugust 27, 2019
Caspian seals, the sole marine mammals inhabiting the Caspian Sea, have faced a sharp decline in population over the past three decades, pushing the species...

by Farid ParsaJuly 9, 2019
Xerxes, the fifth king in the line of the Achaemenid rulers (b. 519 BC) is the first king in history who could not just go...

by Nathaniel BatchelderJuly 7, 2019
I’ve met for years with Oklahoma friends to prevent another U.S. war in the Middle East, or anywhere. We opposed the U.S. war against Iraq...

by RFE/RLApril 13, 2019
Recent prolonged and at times severe rains in Iran have helped put the country’s Lake Urmia on its way to revival, according to the governor...

by Mehr NewsApril 8, 2019
Various regions of Lorestan province, including Mamulan city, were hit by a severe flood last week. Now that the flood has subsided in the region,...

Pictures Of Flood Damage In Khorramabad

by Mehr NewsApril 4, 2019
Devastating floods have been hitting Iran for two weeks, claiming the lives of over 40 people and causing considerable damages across the country. Khorramabad, in...

Just How Bad Have The Iran Floods Been? See For Yourself…

by The IranianMarch 27, 2019
At least 32 people have been killed in southern Iran as the result of severe flooding that occurred on Monday after a robust storm swept...

From Poachers To Protectors, Meet The Rangers Of Masjed Mountain

by National GeographicMarch 10, 2019
Thanks to these former hunters in Iran, some of the country’s rare species are bouncing back.

by Al-MonitorJanuary 25, 2019
The campaign calls on Tehran residents to rely on public transportation to get to work on Tuesdays, with the aim of mitigating the city’s pollution and combating its complicated traffic...

*Cough Cough* Just How Bad Was Tehran’s Air Pollution This Past Wednesday?

by The IranianDecember 6, 2018
*Cough Cough* Just How Bad Was Tehran's Air Pollution This Past Wednesday? On Wednesday, the weather in the Iranian capital Tehran was unhealthy for sensitive...

by Tehran TimesNovember 19, 2018
The country's wild species population is shrinking at an alarming rate as many of the species are facing a decline being killed in car crashes...

by Mehr NewsOctober 8, 2018
Heavy rain in the north of Iran has caused floods that have left trail of destruction in many villages and about 27 cities. The rivers...

by Mehr NewsSeptember 11, 2018
According to Iran's Meteorological Organization, 98.1 percent of the country suffers from varying degrees of drought. The following photos show drought in northeastern province of...

by Fatemeh AmanJuly 18, 2018
U.S. sanctions aimed at making Iran act like a “normal country” have had a disastrous effect on Iran’s environment and that of the entire region...

by Middle East MonitorMay 28, 2018
An Iranian MP said, Sunday, that the residents of four provinces are facing the threat of famine. Mohammad Naim Aminifard, the head of the representatives...

How The US Occupied The 30% Of Syria Containing Most Of Its Oil, Water And Gas

by Whitney WebbApril 17, 2018
After the U.S. launched “limited” airstrikes on Friday against Syria, U.S. Ambassador to the United Nations Nikki Haley announced that the U.S. will maintain its illegal presence...

by Mina JahanshahiApril 15, 2018
Land art is an art movement that emerged in the 1960s and 1970s, largely associated with Great Britain and the United States and has risen...

by James M. DorseyApril 9, 2018
Iranian leaders are struggling, three months after anti-government protests swept the Islamic republic, to ensure that environmental issues that helped sparked a popular uprising in...

Clashes Between Iranian Forces And Farmers In Isfahan

by Ali NejadMarch 9, 2018
Iranian farmers are feeling the pressures of drought and water shortages. The situation is getting worse each year since no water means no crops. The...

Iran’s Environmental Problems Are An Opportunity For Regeneration

by Daryan RezazadJanuary 30, 2018
When uber-warmonger regime change cheerleader Thomas Friedman gets on the Iran water crisis bandwagon you know for sure something toxic is brewing in the backroom. This is... 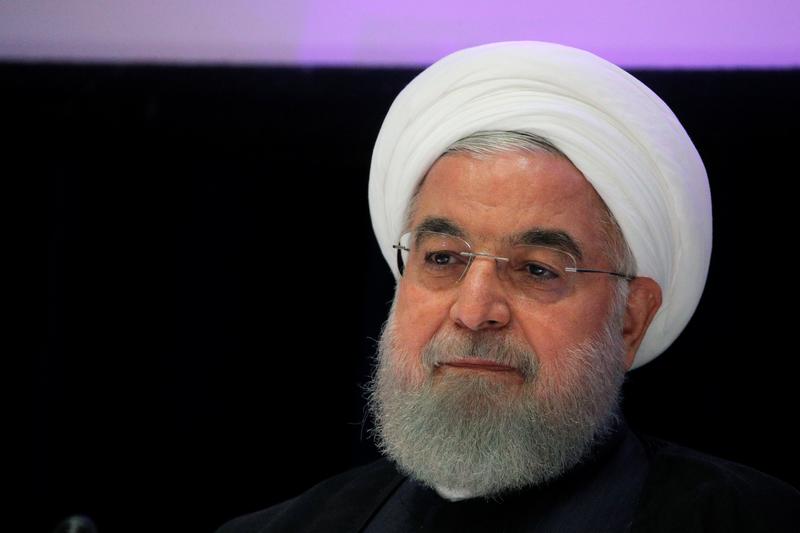 Iran's president on Saturday accused Israel of killing a prominent Iranian scientist long suspected by the West of masterminding a secret nuclear bomb...

#Iran President @HassanRouhani: Iranian nation is wise enough not to fall in Israel trap. We will respond to #Fakhrizadeh assassination "in an appropriate time"

The Pentagon has announced it brought the USS Nimitz aircraft carrier back into the Middle East, a highly unusual move after the ship already spent months in the region. The Pentagon says it is to cover areas in Afghanistan and Iraq that are seeing troop withdrawals.- @AP

They murder our national figures in cold blood and then send their disgusting ferret mercenaries to obfuscate the obvious facts of the matter. Meanwhile, in the democratic west, we are held to ridiculous double standards and tossed away by our own!

Biden's silence re the assassination of Iranian scientist is DEAFENING. https://twitter.com/codepink/status/1332452072785018881